Skift Take
Whereas United may claim that this winter’s dreaded Polar Vortex was behind its losses, JetBlue’s concentration in the U.S.’s northeast means it really was snowed in by the storms.
— Jason Clampet
Share
Tweet
Share
Post
Send

JetBlue‘s first-quarter profit plunged more than 70 percent as winter storms raked areas of the Northeast where it is based.

More than 4,000 flights cost the airline $50 million in revenue and $35 million in operating profits, on top of rising labor costs.

On Tuesday, it was revealed, that JetBlue pilots voted overwhelmingly to unionize, reversing two earlier votes.

Analysts surveyed by FactSet expected earnings of 7 cents per share on revenue of $1.36 billion.

Traffic rose, but so did passenger-carrying capacity, and the average flight was 83.1 percent full, down from 83.9 percent a year earlier. 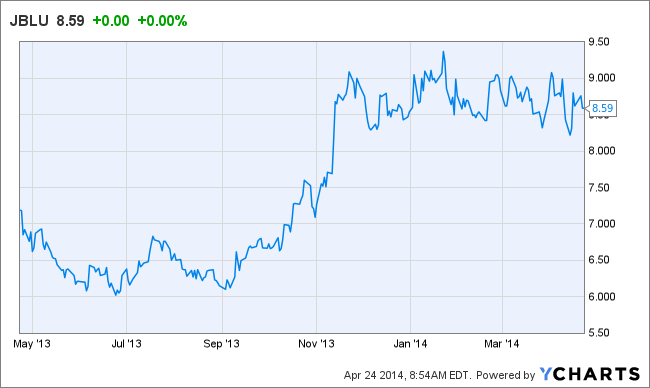 The company predicted higher costs per mile in the second quarter and the full year, partly due to adding new service at Washington’s Reagan National Airport.

Shares of JetBlue Airways Corp., based in Long Island City, N.Y., edged 12 cents lower before the opening bell, but they are still up slightly for the year.