Skift Take
Although a half a million drop is steep, the spring holiday calendar, as well as a season of snowstorms and grounded flights contributed mightily to the decrease.
— Jason Clampet
Share
Tweet
Share
Post
Send

SeaWorld Entertainment Inc. posted a 13 percent drop in attendance at its theme parks as shareholder Blackstone Group LP continued to reduce its stake in the company.

SeaWorld, based in Orlando, Florida, said first-quarter attendance fell to 3.05 million guests from 3.5 million a year earlier, according to a regulatory filing yesterday. The company also agreed to buy 1.75 million of its shares from Blackstone.

Seasonal factors played a role in the drop. This year, the Easter holiday arrives later, Fred Jacobs, a company spokesman, said in an e-mail. It fell in the first quarter of 2013.

The theme-park company has been reducing discounts and raising prices over the past year, moves that have cut attendance, the company has said. SeaWorld has also faced criticism over its use of killer whale in shows, including a CNN documentary called “Blackfish.” The attention hasn’t hurt attendance, SeaWorld has said.

SeaWorld was little changed in extended trading yesterday. The stock rose 1.4 percent to $30.44 in New York and has gained 5.8 percent this year.

Read MoreVienna Palace Rents Room to Tourists for $960 a Night

The repurchase deal announced yesterday coincides with the sale of 15 million SeaWorld shares by Blackstone in an underwritten offering, according to filings. The two actions will reduce Blackstone’s stake in the theme-park company to about 25 percent, filings show.

Blackstone bought the company, which owns 11 parks in five states, for $2.3 billion from Anheuser-Busch InBev NV in December 2009. 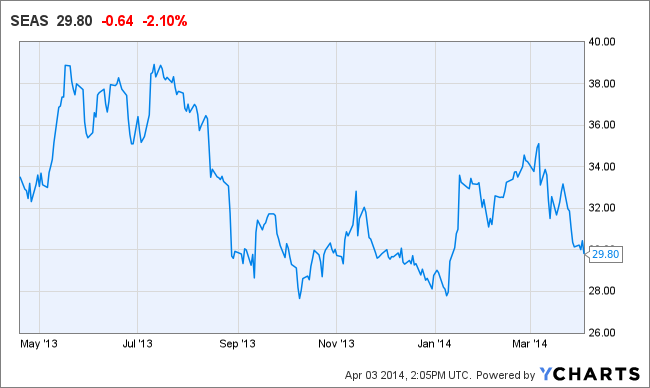 Subscribe Now
Tags: seaworld, theme parks
Photo Credit: Visitors are greeted by an Orca killer whale as they attend a show featuring the whales during a visit to the animal theme park SeaWorld in San Diego, California. Mike Blake / Reuters