Priceline Buying HomeAway Is the Big ‘What If’ in Online Travel Priceline could execute an expensive acquisition of HomeAway if it wants to, and is in a better position to do so than Expedia or any other travel brand.

HomeAway CEO Brian Sharples was talking to investors at a Citi Internet conference in Las Vegas in January about how his company intends to crack down on vacation rental owners who hijack customers and deal with them directly.

And, then he name-dropped that Jeffery Boyd, the outgoing Priceline CEO and current board chairman, told Sharples that its Booking.com unit at times has to deal with the same sort of gamesmanship.

“Booking.com has a very similar thing with hotels,” Sharples said. “Booking.com is just acting as an agent. And the hotels do have opportunities to play all sorts of games. But what Jeff Boyd tells me is they are not going to do that because they are so dependent on Booking.com.”

In the online hotel business, a much-speculated-about and potential Priceline acquisition of HomeAway would be an even more dramatic development than Priceline’s $1.8 billion of Kayak last year.

Sharples and Boyd had obviously been talking, and they were seen chatting it up together at the PhoCusWright conference in November. These sorts of things are routine, and although they might feed the imaginations of conspiracy buffs, such dialogue in itself doesn’t mean much.

Still, if Priceline hasn’t at least taken a look at acquiring HomeAway, given the major push that Booking.com has made over the last couple of years in vacation rentals, then someone should sue Priceline’s management for shareholder neglect.

Although an Expedia acquisition of HomeAway would likely be too steep, Priceline has enough cash on hand, coupled with its borrowing clout, to gobble up HomeAway, perhaps in the $4.6 billion to $5 billion range considering HomeAway’s current $3.7 billion market cap. Priceline’s market cap, by comparison, is a whopping $67 billion. 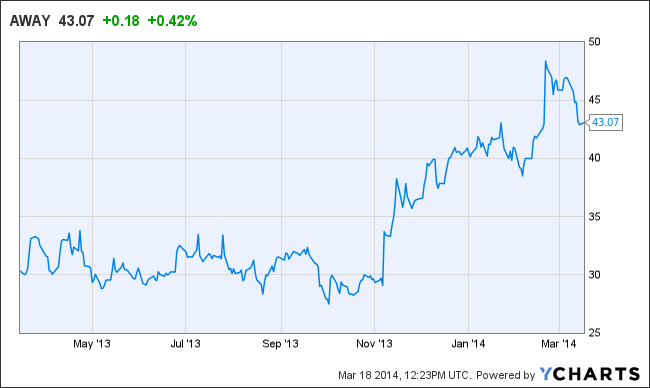 AWAY data by YCharts

Although Expedia has begun a beta of its plan to start offering vacation rentals from HomeAway, Expedia appears to be still wrestling with the issue of whether vacation-rental bookings will eat into its hotel business.

Priceline’s Booking.com, on the other hand, is all in when it comes to vacation rentals.

Based on their combined 2013 revenue, a Priceline-HomeAway combination would create a merged company with around $7.1 billion in annual revenue, although there would be some overlap in the professionally managed vacation rental properties that are offered on both Priceline’s Booking.com and HomeAway’s global sites.

“An acquisition of HomeAway moves the meter almost from day one,” says travel industry analyst Henry Harteveldt, referring to an acquisition by either Priceline or Expedia.

Harteveldt says research shows that travelers 18-23 years old are less likely to stay at hotels than are other age groups, and are open to alternative lodging types.

“When they think of staying somewhere for more than a couple of nights they are no longer thinking automatically about hotel rooms,” Harteveldt says. 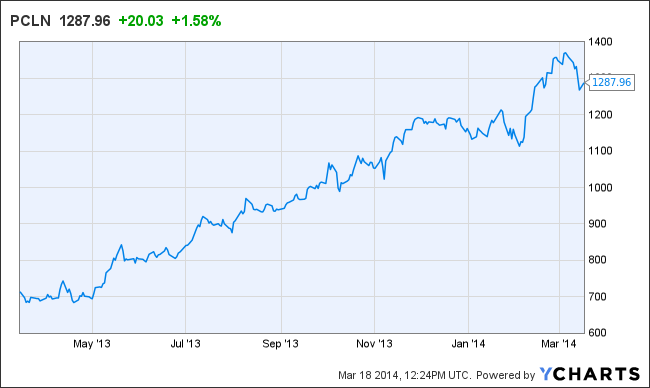 A Priceline acquisition of HomeAway would, however, be dilutive to Priceline’s 2014 earnings estimates given the disparity in their price/earnings ratios. Despite that hit, the Priceline Group obviously sees the strategic imperatives of getting bigger in vacation rentals as the lodging market gets revolutionized.

There is a lot of similarity in the relatively conservative cultures of both HomeAway and Priceline, and the importance of such a fit can’t be underestimated.

Both companies bristle at the notion of getting into offering Airbnb-type apartment rentals, and although HomeAway shares some of Airbnb’s regulatory challenges, a big chunk of HomeAway’s vacation rentals are by owners and professional managers rather than renters essentially sub-letting their apartments for short durations.

One area where there is a wide disparity between the two companies is in their tech capabilities. Priceline is much more of a tech company than HomeAway. For example, Priceline has some great mobile apps while HomeAway’s apps have been subpar.

More importantly, given the nature of the vacation rental market, HomeAway has only around 169,000 of its 890,000 listings that are e-commerce enabled, and only 12,000 of them are currently capable of being distributed through an online travel agency.

Things are trending in the right direction for HomeAway, though. Transaction volume through its e-commerce-enabled Reservation Manager tool doubled in 2013. This was spurred by both by vacation-rental listings’ subscribers opting for electronic payments, and professionally managed properties transitioning to HomeAway’s new pay-per booking option.

If Priceline were to acquire HomeAway, then how then would Priceline cope with HomeAway vacation-rental owners’ relative lack of e-commerce readiness?

Priceline generally lets its subsidiaries operate fairly independently, and it could give HomeAway the freedom to do its thing, make progress on the e-commerce front, and then Priceline/Booking.com could gradually integrate HomeAway’s properties as they come up to speed.

There is a school of though that although a Priceline acquisition of HomeAway would be feasible and game-changing, it isn’t likely at this time because Darren Huston just stepped into the Priceline Group CEO role January 1, and needs to prove to Wall Street that he won’t stumble after all of predecessor Boyd’s accomplishments.

On the other hand, as Huston has pointed out several times, he isn’t exactly a newbie, having capably led the Priceline Group’s largest business, Booking.com, since September 2011.

Another factor getting in the way of a Priceline-HomeAway marriage at this juncture is that Priceline just completed a major acquisition in its purchase of Kayak in 2013, and an even larger and more complicated acquisition in the form of a HomeAway merger could be too much, too soon for any company.

Priceline is well-known for its focus and execution, and a possible misstep on a gargantuan and globally far-flung acquisition would be a sobering prospect.

However, although Priceline hasn’t been the sort of active acquirer on a pace that HomeAway has been, Priceline has been known to shock the world every once in awhile.

After all, no one predicted Priceline’s acquisition of Kayak.

Perhaps then Sharples and Boyd weren’t exactly figuratively talking about their golf games.