Starwood’s shares fell 3 percent in trading before the bell after the owner of the Sheraton and Westin hotel chains also forecast current-quarter profit that was well below market estimates.

“There is limited visibility across the lodging business and as such, we believe conservative guidance at this point is prudent,” MLV & Co analyst Ryan Meliker wrote in a note.

Hoteliers’ results in the current quarter are expected to be hit by slow economic growth in Asia, a severe winter in North America that delayed travel and a slight dip in U.S. consumer sentiment in January.

Hyatt Hotels Corp is scheduled to report results on Friday, while Marriott International Inc and Hilton Worldwide Holdings Inc are expected to report over the next few weeks.

Starwood reported a 3 percent fall in revenue per available room (RevPAR) for hotels open at least one year in Asia, excluding China, for the fourth quarter.

RevPAR is a metric of hotel health, calculated by multiplying a hotel’s average daily room rate by its occupancy rate.

JP Morgan analyst Joseph Greff said that Starwood was also slowing down the pace of its share buybacks.

The company bought back $78.6 million in shares in the fourth quarter, and Greff estimated that $2.7 million of that was repurchased between Oct. 24 and the end of the year. 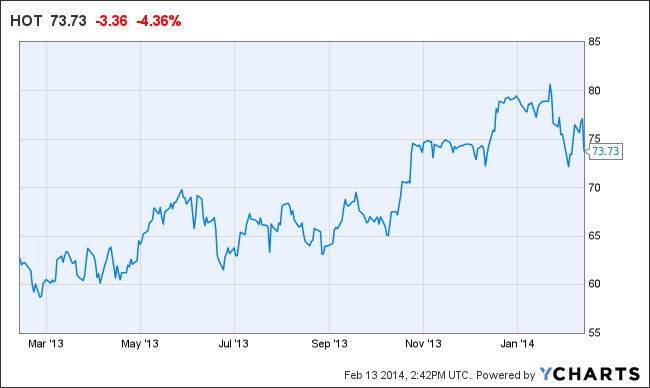 “The real disappointment is in the lack of buybacks in the (fourth quarter),” Greff said.

The company’s shares were down at $75 in premarket trading on Thursday after closing at $77.09 on the New York Stock Exchange on Wednesday.

The stock has gained about 24 percent in the past 12 months, outperforming the 21 percent rise in the Dow Jones U.S. Hotels index.