Priceline Overtakes Expedia in Gross Bookings for the First Time The changing of the guard is now official -- in more ways than one.

The biggest news that shocked online travel yesterday was that Priceline replaced long-time CEO Jeffery Boyd. But when you look beyond that headline, Priceline achieved another major milestone: It surpassed Expedia Inc in gross bookings for the first time.

Gross bookings are the total dollar value of all travel sold, including taxes and fees.

Priceline’s third quarter gross bookings came in at $10.8 billion, a 37.5% leap over the same period a year earlier.

That meant for the first time Expedia was looking up at Priceline from the number two position in gross bookings. Expedia’s gross bookings in the third quarter increased a relatively tepid 15% to $10.4 billion.

The $400 million gap is minor stuff, but it shows the trajectory as Priceline has finally out-distanced its chief rival, and will likely continue to separate itself.

Expedia Inc. is a more well-rounded company than the Priceline Group as Expedia sells a greater variety of products. Priceline’s Booking.com and Agoda, in particular, focus only on hotels.

Still, by the time incoming CEO Darren Huston who will also stay on as Booking.com CEO, takes the helm of the Priceline Group on January 1, he’ll be doing so from the premier position in online travel while predecessor Boyd labored for many years from the number 2 perch, although he built Priceline up from a fraction of Expedia’s size over the years.

Priceline has had a larger market cap than Expedia over the last few years, but the third quarter of 2013 will be marked as the quarter in which Priceline finally surpassed Expedia in gross bookings. 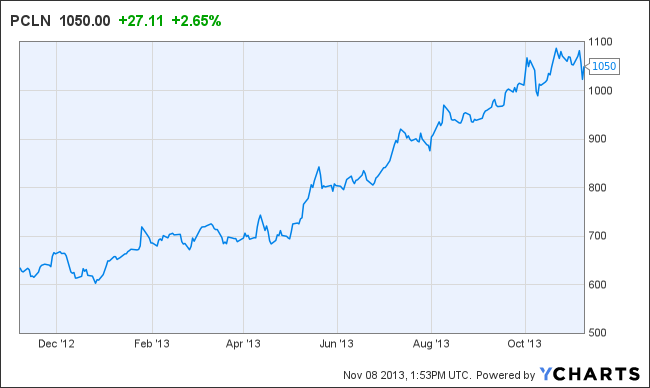 In other developments, Boyd argued in response to an analyst’s question during the company’s third quarter earnings call that the Expedia-Travelocity deal, in which Expedia will power the technology and run the hotel relationships for Travelocity’s scaled down North American businesses, won’t materially impact Priceline.

Boyd said Travelocity will be hamstrung because it will have to share transaction revenue with Expedia, and it will be difficult for Travelocity to grow its revenue.

In contast, Priceline benefits from the full economics of a transaction, Boyd said.

In addition, he said, it will be hard for Travelocity to win the “innovation game” when it will only be working on the front half of the business.

Still, the deal is a good one for Expedia, “a nice addition” to its earnings, Boyd said.

Expedia will also secure greater clout with suppliers because of the Travelocity deal, but it won’t materially alter the “advertising and distribution markets we play in,” Boyd said.

Boyd said it is very early days, but he didn’t appear to be overly concerned with TripAdvisor Connect, a new TripAdvisor program that enables independent hotels and B&Bs to participate in TripAdvisor’s hotel metasearch product.

Boyd said TripAdvisor Connect is a very small part of TripAdvisor’s business at this point so it is difficult to gauge.

Still, Boyd said individual hotels likely won’t be empowered to bid aggressively in TripAdvisor’s hotel metasearch product, and it is unlikely they will have the sophistication to drive conversions in a big way.