Skift Take
American and US Air may fuss a bit more about shedding slots at D.C. and other airports, but for rival airlines the actions will be a nice holiday treat to look forward to.
— Jason Clampet
Share
Tweet
Share
Post
Send

American Airlines and US Airways Group Inc. will have to shed assets at key airports across the country if they want to settle the U.S. lawsuit seeking to block their proposed merger, Attorney General Eric Holder said.

The airlines and the Justice Department are in settlement talks over the lawsuit even as the government is prepared to go to trial to block the merger if the talks aren’t successful, Holder said today.

“What we have tried to focus on is to make sure that any resolution in this case necessarily includes divestitures of facilities at key constrained airports throughout the United States,” Holder said at a press conference in Washington.

He declined to disclose the number of slots for takeoff and landing rights the government wants to see divested before it will approve the tie-up. Talks between the two sides are ongoing, he said.

“We will not agree to something that does not fundamentally resolve the concerns that were expressed in the complaint and do not substantially bring relief to consumers,” Holder said.

American Airlines parent AMR Corp. rose the most in more than eight months after Holder’s comments. 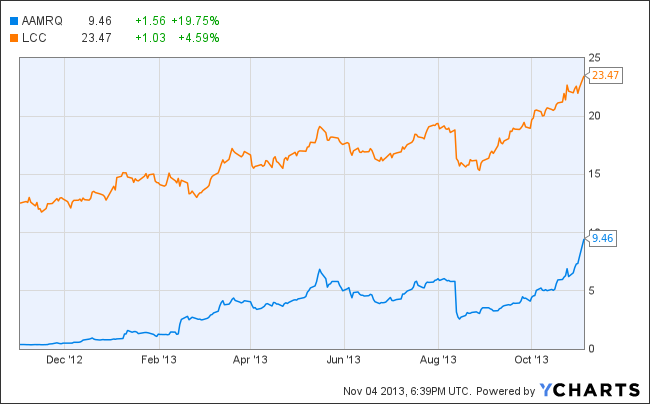 The stock jumped 23 percent to $9.75 at 12:09 p.m. in New York in over-the-counter trading. AMR gained as much as 27 percent, the biggest intraday move since the merger was announced on Feb. 14.

Bondi said in a statement that the sides were “both hopeful that we will reach a timely resolution,” and Horton echoed that with a statement saying he was “hopeful that a resolution can be reached in the near future.”

Florida is among six states plus the District of Columbia that have joined the U.S. Justice Department’s lawsuit seeking to stop the merger of the airlines. They argue the combination would reduce competition and raise prices. Texas dropped out of the lawsuit last month.