Skift Take
In the months since the DOJ made its move to block the merger, American and US Airways have seen a swell of support from hub cities and labor unions — as well as rival airlines who think a settlement means more slots for them at competitive airports.
— Jason Clampet
Share
Tweet
Share
Post
Send

“If there’s a reasonable settlement, I think it’s better for both sides” than going to trial, he said following a panel discussion at a conference in New York yesterday. The suit is set for a Nov. 25 trial.

Investors have been watching the airlines for any sign of an agreement, and AMR rallied 7 percent yesterday, a day after the carriers and the U.S. Justice Department disclosed that they agreed on a mediator suggested by the court. US Airways and bankrupt AMR slumped in August when the agency sued to block the deal, saying a tie-up would damp competition and boost fares.

“It’s incumbent on us to make a very strong case and be ready to help bring about a sensible settlement,” Horton said, without elaborating on what an accord might entail. “I think there’s a way to do that.”

A combination between Fort Worth, Texas-based American and US Airways would create the world’s largest airline. The all- stock merger is now valued at $16.6 billion, based on US Airways’ share price and its stake in the new American, which is counting on the deal as its exit strategy from bankruptcy.

AMR’s gain to $7 in over-the-counter trading yesterday pushed the shares to their highest price since Feb. 22, 2011, nine months before the company filed for Chapter 11 protection. Tempe, Arizona-based US Airways rose 1.6 percent to $22.37 at the close, extending its year-to-date advance to 66 percent. 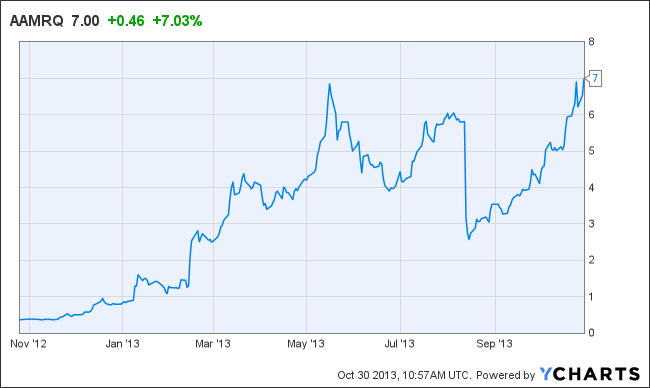 In an appearance on Oct. 16 at Dallas-Fort Worth International Airport, Horton declined to comment on the prospects for an agreement, saying that American and US Airways were open to a “sensible, common-sense” settlement.

Yesterday, Horton cited the airlines’ Oct. 1 settlement with the state of Texas, which had joined the federal suit, as a reason for optimism in the U.S. case.

“I think there’s a way to get there,” Horton said at the Buttonwood Gathering 2013 conference in New York City. “We’re hopeful.”

The Texas agreement shows settlements also can happen with more of the six other states that joined the antitrust challenge, along with the District of Columbia, Horton said. That accord requires the merged airline to maintain a hub at D- FW Airport, keep its headquarters in the Dallas area and retain service to a specific number of Texas cities.

Horton declined to comment on having a mediator in the case, identify the person or say whether any talks had begun.