JetBlue is poised for big growth in the coming year with plans to increase flights, buy larger jets, and grow its overseas network.

JetBlue Airways said Tuesday that its third-quarter net income rose 58 percent, and it will expand flying through the rest of this year and order more planes.

Analysts surveyed by FactSet had been expecting a profit of 22 cents per share.

Fuel prices fell 1.1 percent despite a $3 million loss on fuel hedges that settled during the quarter.

Shares added 1 percent, or 7 cents, to $7.60 in premarket trading Tuesday.

JetBlue Airways Corp. CEO Dave Barger in a statement called the larger A321 “the ideal aircraft for our high-density markets.”

Some of the new A321s will go toward JetBlue’s “Mint” premium service between New York and Los Angeles and San Francisco, intensely competitive routes where JetBlue is up against Virgin America, United and Delta.

JetBlue will be the first airline to get a U.S.-built Airbus plane, due in 2016 from the new assembly facility the European airplane company is building in Mobile, Ala.

JetBlue also said that in 2015 it will begin retrofitting its current A320s with special fuel-saving wingtips called “sharklets.” It said the new wingtips should cut fuel consumption by up to 3 percent. 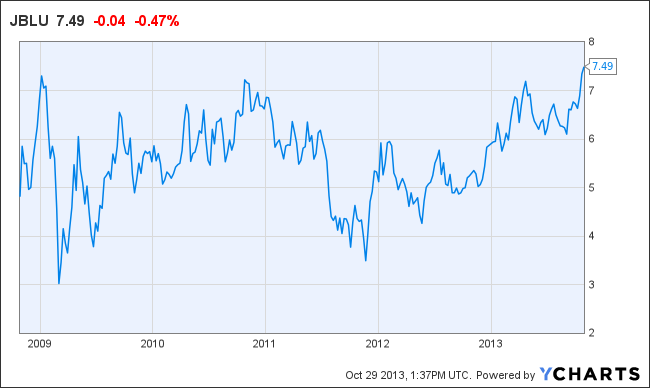