United CEO Says ‘We Are Not Satisfied’ Over Third-Quarter Performance

Skift Take
United is the biggest airline, but it’s also one of the most disliked ones in the U.S. Improving the customer experience goes a long way towards luring them on competitive routes.
— Jason Clampet
Share
Tweet
Share
Post
Send

“We are not satisfied with our financial performance,” Chief Executive Officer Jeff Smisek said today in a statement, without elaborating. United plans a call with investors at 10:30 a.m. New York time.

Sales rose 3.2 percent to $10.2 billion, missing the $10.3 billion average estimate of 10 analysts surveyed by Bloomberg. Profit excluding some costs was $1.51 a share, Chicago-based United said, short of the $1.55 average estimate.

United, the biggest U.S. carrier on routes to China, warned last month that airlines’ rising seating capacity across the industry on those flights was eroding fares, damping revenue from each seat flown a mile, an industry benchmark. Delta Air Lines Inc. has added service this year between the U.S. and China, as have China Eastern Airlines Corp. and Air China Ltd. 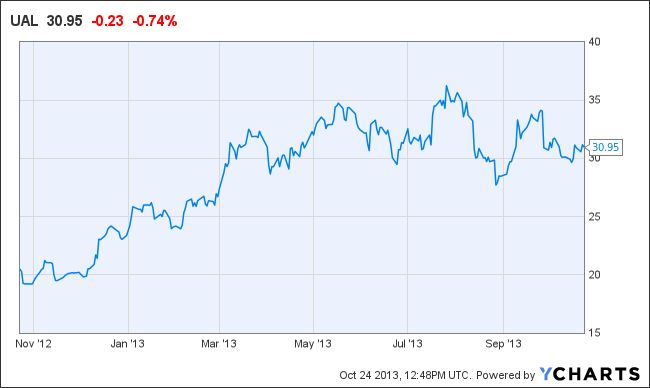 United is “disappointed by the pace of our revenue improvements, and we are taking numerous actions to improve our performance to more swiftly realize our full revenue potential,” Chief Revenue Officer Jim Compton said in the statement.

While United’s shares rallied 32 percent this year through yesterday, closing at $30.95, that was only the seventh-biggest gain among the 10 carriers in the Bloomberg U.S. Airlines Index. Delta has more than doubled, and Southwest Airlines Co. rose 60 percent in that span.