Skift Take
The upside of these earnings is that hotel room prices and occupancy are up for the brand. It’s not the big boost property sales bring, but it’s long-term sustainable growth that points to the health of the industry.
— Jason Clampet
Share
Tweet
Share
Post
Send

Net income declined to $157 million, or 81 cents a share, from $170 million, or 87 cents, a year earlier, the Stamford, Connecticut-based company said today in a statement. The average estimate of 14 analysts was 63 cents a share, according to data compiled by Bloomberg.

Real estate divestments have slowed at Starwood, which in the third quarter of last year sold W hotels in Chicago and Los Angeles and had $12 million of earnings before interest, taxes, depreciation and amortization from condo sales at Miami Beach’s Bal Harbour Resort, which opened in January 2012. 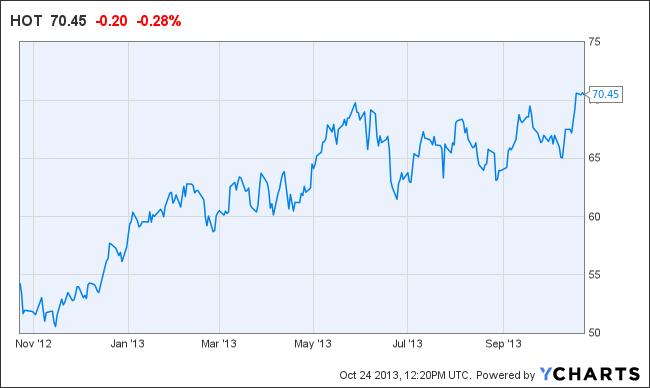 “Last year they primarily benefited from hotel sales as well as condo sales in Florida,” Patrick Scholes, an analyst at SunTrust Robinson Humphrey Inc. in New York, said before earnings were announced. “But Bal Harbour is nearly sold out and you don’t have as much income from that anymore.”

Revenue climbed 3.6 percent to $1.51 billion from $1.46 billion a year ago, Starwood said. Revenue per available room, an industry measure of occupancy and rates, rose 4.7 percent worldwide and 5.8 percent in North America adjusted for currency movements.