Foursquare is still making baby steps into the big, big world beyond the check-in. Can it move fast enough into local discovery in order to survive?

Foursquare is opening its promoted listings ads to all small businesses around the world.

The promoted listings show up in the app’s Explore function, which consumers use to discover nearby restaurants, bars, parks or other attractions. If a Foursquare user searches for “burgers,” for instance, then a nearby burger shop can bid to have its store listing shown in the search results.

Businesses are charged on a cost “per action” basis for these ads, meaning they only pay if a user taps on a promoted listing or checks in at the advertised location. Businesses can also choose if they want to promote a special offer, a user-generated tip about the location or just the store listing.

Pricing will differ based upon the nature of each business. Lower margin businesses such as coffee shops will typically bid between $1 and $3 to lure in a customer, whereas spas, high-end retailers and expensive restaurants may bid up to $7 on an individual Foursquare user, chief revenue officer Steven Rosenblatt said.

Foursquare started testing paid promotions with a handful of small businesses in New York City earlier this year and Mr. Rosenblatt said the company has been refining the service over the last several months.

Small business advertising is one of five revenue streams for the four-year-old company, which popularized the notion of the check-in but has yet to prove it can scale as a business. The others include national brands promoting nearby locations, ads served to customers after they check in at a location, selling users’ location data via ad-tech company Turn and its pre-existing merchants services — charging stores $20 to claim their location on the app and allowing them to offer in-app discounts to Visa, MasterCard and American Express users. 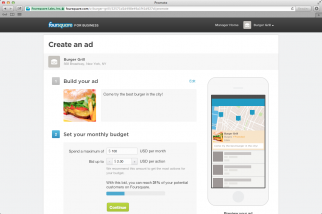 Foursquare has made generating revenue a focal point this year as many have questioned whether the former startup darling will ever justify its $760 million valuation. “The check-in is the most powerful location signal that exists today,” Mr. Rosenblatt said.

A Fast Company profile of Foursquare founder Dennis Crowley from earlier this year reported that the company was on pace to earn between $15 million and $20 million in revenue this year. Foursquare neither confirmed nor denied this figure.

Much of the skepticism stems from Foursquare’s small scale relative to Facebook and Twitter, social media competitors with user bases in the billions and hundreds of millions, respectively. Foursquare spokesman Brendan Lewis said the company records more than 6 million check-ins a day worldwide, but wouldn’t comment on the company’s monthly average users.

Foursquare expanding its paid promotions to all interested businesses worldwide will certainly allow it to generate more revenue, but small businesses have been traditionally reluctant to spend money on digital advertising. U.S. small businesses devote only 3% of their advertising budgets to digital, 12 percentage points less than the national average, according to a recent Boston Consulting Group study.

Mr. Rosenblatt sees this as an untapped opportunity. There are currently 1.5 million stores registered on Foursquare, 1,000 of which are already using the paid promotion feature. Mr. Rosenblatt has hired a local sales team — currently less than 10 people — that will look to expand that number.

That sales team will have to contend with some small business owners’ negative perceptions of local discovery platforms. Groupon and Yelp became successful by working with small businesses, but they’ve also been accused of taking advantage of those same partners. Some small businesses have reported being overwhelmed with one-time customers after running Groupon deals. Yelp, meanwhile, has been repeatedly accused of extorting small business into buying its ad products. A class-action lawsuit against Yelp alleging such action was dismissed in 2011.

“[Small business owners] are not really sure what a like means or what a click means. There’s fatigue in the daily deals space and there’s a lot of lack of trust in the small business space,” Mr. Rosenblatt said. “They just want to know that if I spend money, am I seeing a response, am I seeing a customer come in?”