Khosrowshahi and Expedia have not been candid about the management purge at Hotels.com, refusing to even state publicly who the new Hotels.com president is. All of this occurs several months after well-documented problems at sister company Hotwire, which also saw a change in leadership. Not a great confidence booster.

Deutsche Bank downgraded Expedia Inc. stock to “hold” after a management shakeup at its Hotels.com unit, and Expedia CEO Dara Khosrowshahi reacted to the developments by dismissing the analyst’s note.

“I don’t spend my time worrying about analyst upgrades and downgrades,” Khosrowshahi said, adding that some 25 analysts cover the company.

Khosrowshahi said the Hotels.com “restructurings,” which saw Scott Booker replaced as Hotels.com president by Johan Svanstrom, according to our sources, along with other shifts in management ranks, were part of consolidating supply functions under the Expedia brand.

Expedia Inc. is slated to report its third quarter earnings on October 30, but in the second quarter it notched decelerating room night and revenue growth tied to problems at Hotels.com and Hotwire, and difficulties using TripAdvisor as a marketing vehicle because of its recent switch to hotel metasearch.

Despite rival Priceline’s market share gains in the first six months of the year, Khosrowshahi, who was interviewed today on CNBC, said Expedia will be in “great shape” during the second half of 2013.

Khosrowshahi’s comments came after a shakeup in Hotels.com management that Expedia announced internally on Friday, and a Deutsche Bank downgrade of Expedia stock from “buy” to “hold.” 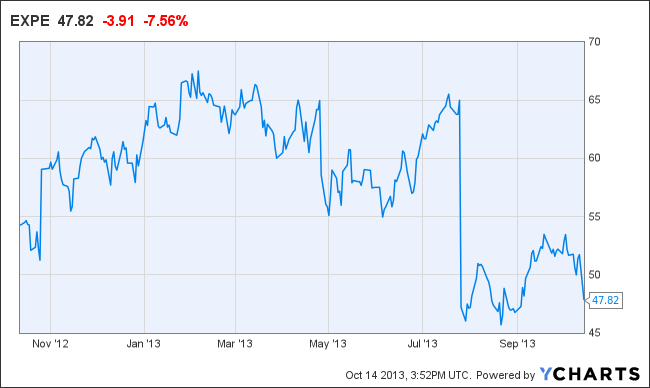 Deutsche Bank analyst Ross Sandler wrote in a research note that the Hotels.com management changes could drive down the bank’s estimates for Expedia.

Sandler wrote in his research note, according to StreetInsider.com: “We’ve stated that there are three scenarios likely to play out with EXPE shares: 1) The “Quick Fix” whereby Expedia fixes the short term problems from 2Q (TripAdvisor, Qunar, etc) and is able to hit its full-year guidance, 2) The “Almost Gets There” where EXPE fixes the 2Q problems, but has additional cost for on- boarding the Travelocity deal and other items, and has to take guidance down slightly, or 3) The “Breakdown” where EXPE sees further execution and competitive issues, and management reduces guidance again.”

“Our view had been that EXPE was somewhere between scenario #1 and #2, however, after learning of the recent management changes at Hotels.com and finalizing our quarterly checks, we believe EXPE is closer to #2 or #3, and hence are stepping aside, trimming
estimates and downgrading to Hold from Buy,” Sandler wrote.

On other subjects, Khosrowshahi told CNBC that the company hasn’t detected any adverse trends from the federal government shutdown, although that could change if it is prolonged.

“At this point we are not seeing any significant trend one way or another,” Khosrowshahi said.

He did say, however, that the company is seeing increased “volatility” in business travel, which requires a stable environment for investment.

“I think that is where the real danger is,” Khosrowshahi said.

The Expedia CEO also added a little color to today’s release of an Expedia survey on the travel patterns of millennials, age 18-30.

Khosrowshahi said they had smartphones before they had college degrees, and they are traveling more than ever — all of which bodes well for Expedia.