Carnival Corp’s shares slid a further 5 percent on Wednesday as analysts cut their price targets on the cruise operator’s stock and expressed concern that a recovery in bookings would come no earlier than 2015.

The stock fell to $32.81, taking its loss to about 13 percent since Carnival reported weak third-quarter results on Tuesday and warned of a possible loss in the current quarter. 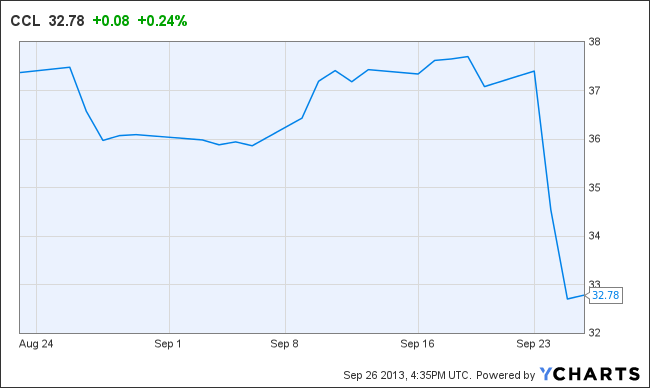 Carnival’s bookings have fallen following a series of mishaps on the company’s ships, including the capsize of the Costa Concordia off Italy in 2012.

At least one analyst downgraded his rating on the stock, while six cut price targets by up to $4, to between $32 and $42.

The brokerage also said it expected net yields to recover slowly and costs to rise as the company spends more on improving its fleet and marketing to boost sales.

Carnival said on Tuesday that it expected net yields to fall about 3 percent in the first half of 2014. Net cruise costs are expected to be at the same level as 2013.

“The quarter was all about the company’s forward operating commentary, which we believe substantially undershot our and investors’ bogey for net yields and net cruise cost in 2014,” JP Morgan analyst Kevin Minolta wrote in a note.

Minolta said he expected Carnival to recover in 2015 but that the process would consume more cash flow than he had expected. He cut his price target on the stock to $32 from $34, but maintained his “neutral” rating.

Of the 16 analysts covering the company, three have “buy” ratings on the stock, according to StarMine. Nine rate the stock a “hold” or “neutral”, while four have “sell” ratings.

Stifel Nicolaus analyst Steven Wieczynski is among those who have a “buy” rating on Carnival’s stock.

“We believe management simply used yesterday’s release to essentially flush all of the bad news out of the name,” he wrote in a note, adding that he expected Carnival’s 2014 net yields to be better than the company has forecast.

Carnival shares were down 5.3 percent at $32.71 in early afternoon trading on the New York Stock Exchange.

(Reporting by Siddharth Cavale in Bangalore; Editing by Ted Kerr)