How Kayak Has Transformed Its Mobile App Usability Since 2009 Priceline is no slouch when it comes to mobile, but it tapped Kayak as an acquisition target in part because of Kayak's mobile expertise. This is the long-gone Kayak logo from its first iPhone app, which debuted in March 2009. 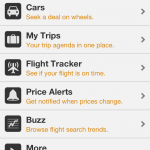 In Version 26.0.4 of Kayak’s iPhone app, updated on September 10, 2013, here’s the lineup of features, ranging from hotels to flight tracker, price alerts and airline fees. In Kayak’s 2009 iPhone app, flight trends were displayed on this graph beneath the results, enabling users to find “Best Fares.” 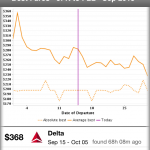 In Kayak’s 2013 iPhone app, the 2009 Trends has become Buzz. And, the fare graph by date of departure looks more elegant, and is positioned above the flight search results, not below. In Kayak’s 2009 iPhone app, users could drag the departure and return dates to change flight dates. And, the only flight-search options were roundtrip or one-way. In Kayak’s 2013 iPhone app, users merely need to tap the date to open the calendar, and then tap their selected dates. In the current iPhone app, flyers can also search for multi-city itineraries. There wasn’t much hotel imagery in Kayak’s sparse 2009 iPhone app, and hotels could be sorted by Cheap, Close (to users’ current locations), and Classy. Now that Kayak is part of the Priceline family, notice the Priceline Express Deals (“No Bidding!”) ad atop hotel search results in the 2013 iPhone app. In addition to filter and sort options, and hotel photos, there’s the now-required map option, too. The flight-results screen in Kayak’s 2009 iPhone app was a cluttered affair with the option shown to filter results by stops, airlines and airports, for example. There was also navigation for hotels, Trends (now called Buzz), Airlines, and More. 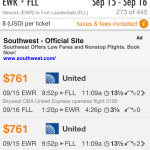 The flight-results screen in Kayak’s 2013 iPhone app is less cluttered with filter and sort options tucked behind their respective buttons. Even Southwest is advertising in Kayak’s iPhone app now, and note that transparency about codeshares are now required. Kayak’s 2009 iPhone app conveniently displayed its most-searched airlines. Several of them, including Northwest and Continental, no longer exist as brands. AirTran is on its way out, and American Airlines-US Airways is an antitrust question mark. Kayak’s 2013 iPhone app shows options for filtering by airline. There are also navigation options for stops, airport, price and time. There was no Facebook log-in option in Kayak’s 2009 iPhone app, but in Kayak’s 2013 iPhone app, shown above, Facebook and other social options have become standard. And, of course, there are iCloud syncing options in 2013.

Kayak, which launched its first app on the iPhone in March 2009, was one of the first-movers in travel mobile apps. And, more than 26 million downloads later, that’s one of the reasons that Priceline shelled out $1.8 billion to buy the travel metasearch company.

For Kayak, fast forward four-and-half years from its mobile-app debut, and the brand is on Version 26.0.4 of its iPhone app. Kayak also supports apps on the iPad, Android, Windows Phone 7 and more. Support for Blackberry was dropped as RIM teetered.

>> To view how the usability of Kayak’s apps have evolved from 2009 to the present, view the gallery (above). We’ve been tracking how mobile travel apps have transformed the user experience.

You can look back at Kayak’s 2009 iPhone app with some nostalgia. Logging-in with Facebook, social media, hotel photos, maps, flight-tracking and itinerary management — staples of its 2013 apps — weren’t in the plans.

Some of the airlines, including Continental and Northwest, that were mainstays of the 2009 Kayak app now are deceased brands.

There were also no ads, let alone the current ones in the 2013 app from go-it-alone Southwest or Kayak’s new parent, Priceline.

In addition to new features cited above, as well as visual flight status and airport guides, the 2013 Kayak app is sleeker than the 2009 maiden version, as the iPhone’s physical stature has grown, and the current app is less cluttered than the initial one, with parallels to the redesigned and simplified Kayak website.

The 2009 Kayak iPhone app was, of course, lightly used at first, but Kayak’s mobile apps in the first quarter of 2013 generated 5.5% of the company’s revenue, and will undoubtedly be a larger contributor in years to come.

Take a look (above) at how Kayak’s mobile apps have evolved since their infancy, and just consider what is to come.