Bay Area bicyclists can finally boast they're part of the sharing club, but may still have a bit of an inferiority complex until the program expands beyond this very modest first fleet. 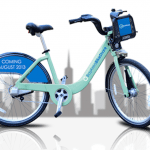 The Bay Area Bike Share’s founding members have black keychains, as opposed to the standard model.

After several delays, the Bay Area’s Alta Bicycle Share has announced it will launch on August 29.

The Bike Share will have a first fleet of only 700 bicycles and 70 kiosks, likely adding more bikes early next year. The cities taking part include San Francisco, Redwood City, Palo Alto, Mountain View and San Jose.

Despite its progressive and environmentalist reputation, the Bay Area is a bit late to the bike share game. It joins more than 20 other programs throughout the U.S., and will be one of the smallest programs.

Europeans Could Make Bikes a Commuting Choice as Businesses Reopen

Biking to work could be a nice stop-gap measure as commuters seek to avoid mass transit while coronavirus is in the air. But the term mass transit has the word "mass" in it for a reason, so will it all scale?

This sounds like a good idea, an electricity-powered car-like vehicle that shuttles people about town that's one-third the size of a parking space. And yet those parking spaces are paved with the skeletons of failed urban transit experiments.

Electric Scooters May Compete With Bikes — and Cars — on City Streets

Electric scooters may play a heightened role in the plethora of urban transport options for people and businesses. In places like Colombia, for example, they are already a popular transportation mode. As startups get into gear, larger ridesharing companies may bring them into the fold.