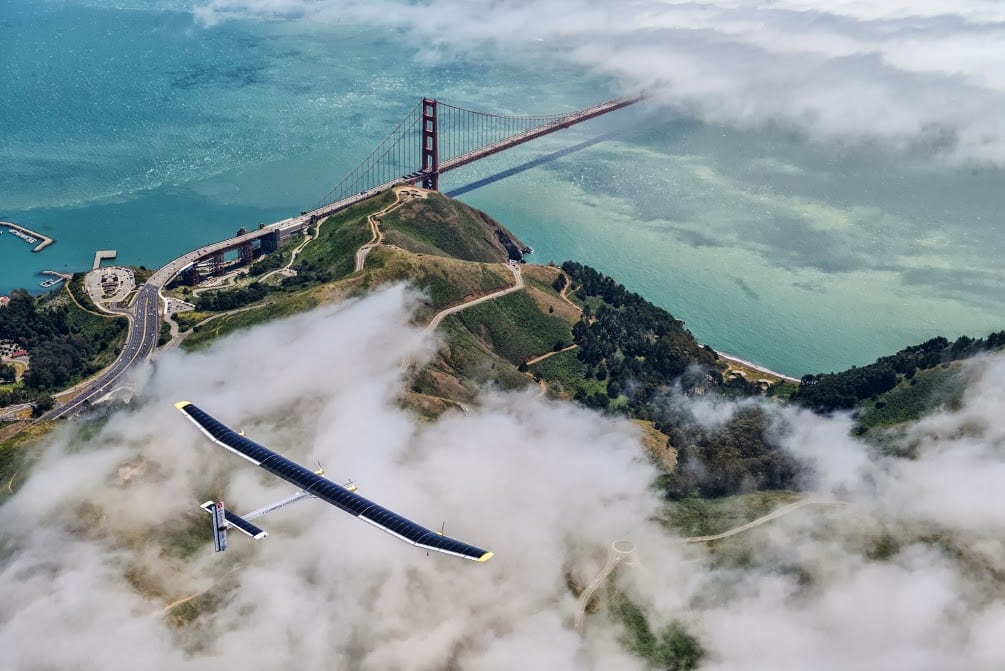 In noisy, energetic New York City, the pilots of a spindly plane that looks more toy than jet hope to grab attention in a surprising way: By being silent and consuming little energy.

This revolutionary solar-powered plane is about to end a slow and symbolic journey across America by quietly buzzing the Statue of Liberty and landing in a city whose buildings often obscure the power-giving sun. The plane’s top speed of 45 mph is so pokey, it would earn honks on the New Jersey Turnpike.

The plane is called Solar Impulse. And it leaves from Washington on a commuter-like hop planned for Saturday, depending on the weather. It will take hours for the journey and offers none of the most basic comforts of flying.

But that’s OK. The aircraft’s creators say its purpose really has little to do with flying.

They view themselves as green pioneers — promoting lighter materials, solar-powered batteries, and conservation as sexy and adventurous. Theirs is the high-flying equivalent of the Tesla electric sports car. They want people to feel a thrill while saving the planet. Think Charles Lindbergh meets Rachel Carson.

And if there’s one person who knows about adventure and what it means to Earth, it’s Bertrand Piccard.

He’s one of the two pilots who take turns flying Solar Impulse. His grandfather was the first man to see the curve of the Earth as a pioneering high-altitude balloon flier more than 80 years ago. His father more than half a century ago first took a submarine to the deepest and most inaccessible ocean trench on Earth.

And now in the 21st Century outside the Smithsonian’s Air and Space Museum annex not too far from a retired space shuttle, Piccard says there’s no truly new place on Earth for explorers to pioneer. At 55, he’s tried.

He already was the first person to fly around the world non-stop in a balloon, but that wasn’t really enough. So Piccard found a way to explore by looking inward and acting globally.

“It’s an exploration of new ways of thinking,” said Piccard, who is also a psychiatrist. “It’s important to understand that pioneering is not only what you do. It’s how you think. It’s a state of mind more than action.”

For him, there was no better cause than clean technology.

“After a conquest of the planet, the 21st Century should be about improving the quality of life,” Piccard said. And the lightweight beanpole that’s called Solar Impulse “is something spectacular in order to capture the attention of the people. If you make a solar bicycle to drive, nobody would care. If you make a solar plane, everybody cares. Everybody wants to see it.'”

Europe saw it first with a test flight from Switzerland and Spain to Morocco last year. This year’s U.S. flight is another trial run that’s really preparation for a 2015 around-the-world trip with an upgraded version of the plane. Solar Impulse has been to San Francisco, Phoenix, Dallas, St. Louis, Cincinnati and Washington. All that’s left is New York’s JFK Airport and Piccard talked about having to wait his turn to land with all the big jets.

“We’re flying the most extraordinary airplane in the world,” Piccard said.

Although it’s promoted as solar-powered, what really pushes the envelope with this plane is its miserly energy efficiency, said Solar Impulse CEO Andre Borschberg, the plane’s other pilot.

Parts of its wings are three times lighter than paper. Its one-person cockpit is beyond tiny. Borschberg lowers himself gingerly into it for a television camera, grimaces, and practically wears the plane it is so snug on him.

Most of the 11,000 solar cells are on the super-long wings that seem to stretch as far as a jumbo jet’s. It weighs about the size of a small car, and soars at 30,000 feet with what is essentially the power of a small motorized scooter. When it landed at Dulles International Airport in suburban Washington after midnight on June 15, its wings were lit with 16 LED lights that used less power than two 100-watt bulbs.

“We can use much less energy than we use today without the sacrifice,” Borschberg said. “And that’s really important.”

People won’t sacrifice to save energy or the planet, but if they are smart they don’t have to, Borschberg said. That’s why he and Piccard pointedly talk about “clean technologies” not “green technologies.” They think “green” has the image of sacrifice.

The only sacrifice with the plane is staying up in the air alone for 20 hours in such a small space.

And even then, the two pilots don’t call it a sacrifice. Borschberg said after a while it feels homey and enveloping and it’s hard to get out of the cocoon. Sitting for eight hours in an economy class seat on a commercial airplane is cramped; doing what you love by sitting three times longer in this plane isn’t, Piccard added.

The flights are long because here’s another thing about Solar Impulse: It’s slow. Its cruising speed of just under 45 mph would get them honked at on an highway.

So that has meant a lot of 4 a.m. take-offs in the dark and landings well after midnight. But Borschberg, who will pilot the last leg from Washington to New York, is hoping for a daylight approach to New York City so he can get a photo opportunity with the Statue of Liberty.

Borschberg and Piccard both say this is not about clean-energy planes for the future. What they’re doing is more likely to improve energy efficiency on the ground, in cars and homes, agrees U.S. Energy Secretary Ernest Moniz who met with the pair to talk up future energy a couple days after they landed at Dulles.

Still, questions of practicality come up.

“It’s clearly a stunt,” said John Reilly, co-director of MIT’s Joint Program on the Science and Policy of Global Change. “And it’s clearly an attention-grabbing stunt. The idea that you could fly an airplane powered by the sun is kind of hard to believe. So doing it is an impressive stunt, I suppose.”

But these types of gimmicks do pay off at times, Reilly said.

It will pay off more than promoting solar and other renewable energy technologies as economic stimulus, which is what happened four years ago, said University of Colorado science policy professor Roger Pielke Jr. He compared it to giant prizes that encourage private companies to go into space or build robot-driven cars, which are proving successful.

“I don’t think it’s just a stunt,” Pielke said. “The idea is that you’re pushing boundaries and you’re putting on shows for people and achieving milestones.”

This, Pielke said, is “an essential part of technological innovation. It gives people an opportunity to attempt what previously was thought of as impossible.”

Subscribe Now
Tags: green
Photo Credit: In this June 17, 2013 file photo, Andre Borschberg, one of two pilots of the Solar Impulse plane is interviewed by a reporter on a ladder as he sits inside the cockpit of the solar powered plane during a media availability at the Smithsonian National Air and Space Museum’s Steven F. Udvar-Hazy Center at Washington Dulles International Airport in Chantilly, Va. Jacquelyn Martin / AP Photo