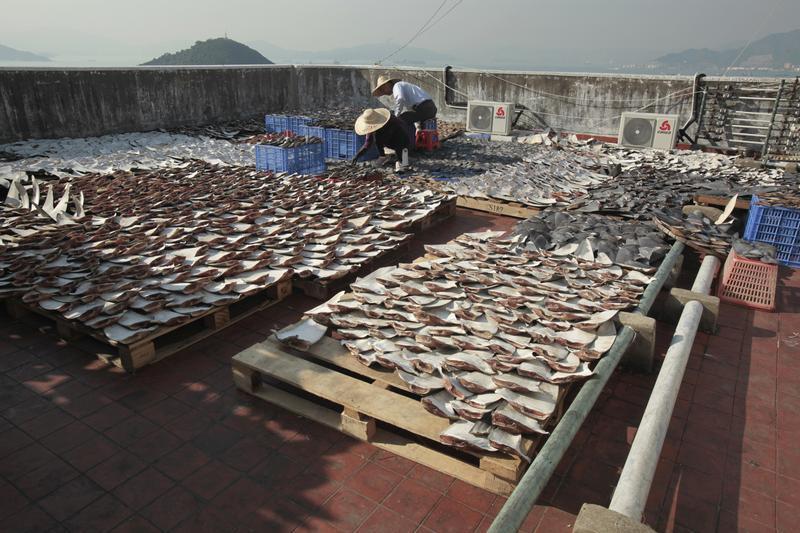 The wins with airlines are primarily symbolic as the vast majority of fins are transported by boat. A more successful attack on the practice is coming from a younger generation that doesn't see the need for shark fin soup.

Shark fins’ ride in plane bellies is beginning to end.

The airlines’ ban on carrying the cargo may aid steps by environment lobbies to protect sharks, whose fins can cost as much as $800 per kilogram ($364 per pound). Hong Kong is the transit point for about half of the global shark fin trade, which largely goes to the Chinese market, said Alex Hofford, executive director at MyOcean, a marine conservation group.

“The airlines know it’s good to be seen as doing the right thing as passengers become more environmentally aware,” Hofford said. “Economically speaking, it doesn’t affect them one bit as it’s so tiny compared to all the other things they carry, electronics, phones or other cargoes.”

About 10 percent of global shark-fin trade is freighted through air with the rest moving by ships, Hofford said. Hong Kong imports shark fins from all over the world including Africa, Europe, south Pacific, Indonesia, Japan and the Middle East, he said.

Fishermen obtain the fins by slicing them off sharks and leaving them back into the ocean, a process called “finning”, Korean Air said in a June 20 statement. More than 73 million sharks are finned around the world every year, it said, citing research data.

Asian airlines and airports are aiming to move to higher- value goods to counter a weak global air-freight market, which declined for a second straight year in 2012 amid a slump in demand across Europe.

Changi Airport, Southeast Asia’s largest freight airfield, plans to attract more gold bars, tuna and vaccines to Singapore as it seeks to increase handling of high-value cargo to make up for slowing trade.

Cathay Pacific, the world’s biggest international air-cargo carrier, aims to replicate its business-class strategy in a cargo trade upgrade. The airline said in February it wants to fly more diamonds and medicines rather than T-shirts.

Environmental groups, including Shark Rescue and MyOcean, last month also sent a letter to Fiji’s Air Pacific, urging it to stop the carriage of shark fins and related products from the south Pacific on flights to Hong Kong.

They plan to lobby Qantas Airways Ltd. and Air France-KLM Group to urge them to stop carrying the fins, Hofford said.

Air New Zealand suspended the carriage of shark fins on May 21, while a review of this issue is underway, the carrier’s spokesman Andrew Aitken said in an e-mailed statement last week.

Cathay Pacific in September announced a restrictive policy that it will only accept independently verified sustainable shark and shark-related products. While the carrier is still working on the implementation of the policy, it has reduced the volume of shark fins carried to 3 tons in the six months ended March from about 300 annually before the announcement, according to an e-mailed statement from the carrier on June 20.

“We will only ship from sustainable sources and will continue to do so,” its Chief Executive John Slosar said last week in Hong Kong.

Transport restrictions could make a soup, made with 76 grams of shark fins, pricier than the HK$1,320 ($170) it sells at the Fook Lam Moon Group restaurant in Hong Kong.

Shark fin consumption in Hong Kong is going down as young people have increased awareness of protecting endangered species, Hofford said. The older generation of people continues to consume shark fins, he said.

Cissy Ho, a 27-year-old who is getting married next month in Hong Kong, said she had to agree to her family members’ decision to include shark fin soup in the menu for her wedding banquet.

“I would choose bird’s nest dish over shark fin soup, but I failed to convince the elders,” said Ho, who works at a Hong Kong-based company. “They still think shark fin soup is a must- have item to show their generosity towards guests.”

Photo credit: Workers lay out pieces of shark fin to dry on a rooftop of a factory building in Hong Kong. Bobby Yip / Reuters