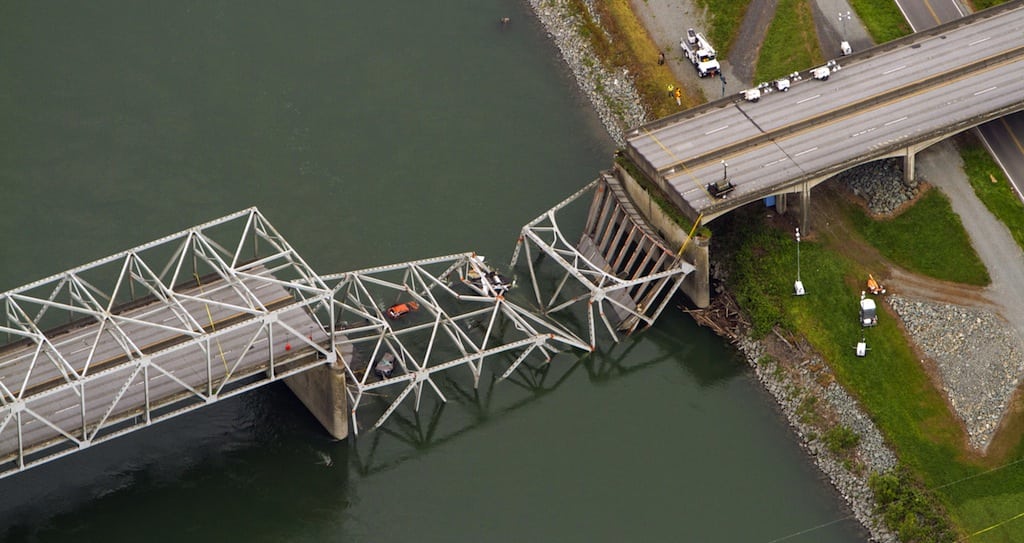 A bridge collapse here, an unstaffed air traffic control tower there, and this is what happens when Congress believes that taxes are the devil and the federal government has no role in taking care of the country's infrastructure.

Six years after a Minneapolis bridge collapse that killed 13 people called attention to the state of the nation’s bridges, there has been minimal improvement and insufficient funding to repair and replace aging spans.

The collapse Thursday of the Interstate Highway 5 in Washington state shined the spotlight once again on troubled bridges.

In 2012, the Federal Highway Administration said 67,000 — 11% — of the nation’s 607,000 bridges were structurally deficient. That means the bridges are not unsafe but must be closely monitored and inspected or repaired.

Photo credit: A collapsed section of the Interstate 5 bridge over the Skagit River in Washington State is seen in an aerial view Friday, May 24, 2013. Part of the bridge collapsed Thursday evening, sending cars and people into the water when a an oversized truck hit the span, the Washington State Patrol chief said. Whatcom Counties. Mike Siegel / Associated Press/Seattle Times