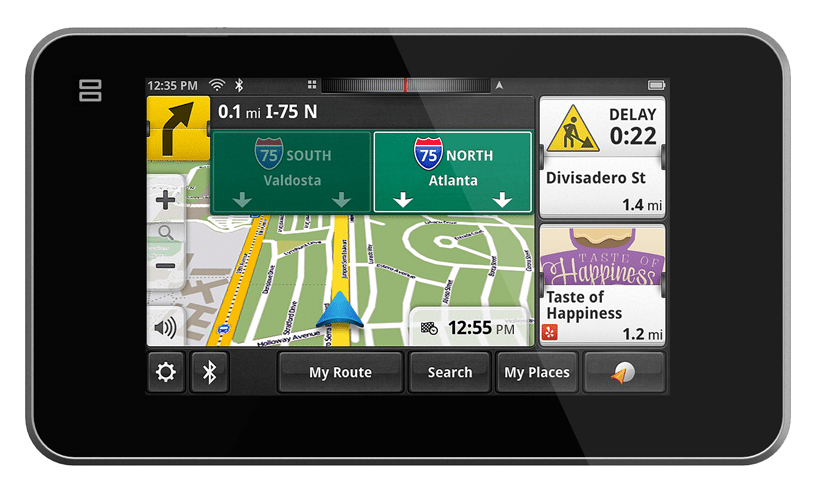 Will drivers want to purchase portable GPS units when they already have navigation apps on their smartphones? Doubt it.

Makers of portable global-positioning systems are caught in a squeeze.

Once a luxury item, in-dash navigation is showing up in cheaper cars, while smartphone apps like Google Maps and Apple Maps are adding more nav-system-like features such as spoken- turn-by-turn directions.

Mitac International, the maker of the Magellan line of GPS devices, is taking the if-you-can’t-beat-’em, join-’em approach. Its new $249 SmartGPS takes advantage of the Cloud and social media in an effort to co-exist with smartphones rather than compete with them.

The SmartGPS looks like an overgrown iPhone with a five- inch screen. It plugs into the cigarette lighter in your car and attaches to the windshield with a suction-cup mount.

On half of the screen, the unit provides 2D and 3D maps and turn-by-turn directions spoken in a clear, robotic voice. You can also link your phone to the unit via Bluetooth and use it as a mobile speakerphone.

Nothing particularly smart — or Smart — about that stuff.

The other half of the screen, though, is taken up by boxes that contain traffic and safety alerts, fuel prices and constantly changing, location-aware windows that present you with information and offers from stores, restaurants and other places of interest.

These are downloaded and stored on the device whenever you’re parked within range of a recognized Wi-Fi network. (There’s even a crude Web browser available when you have a Wi- Fi connection, the SmartGPS having been built atop an old version of Google’s Android operating system.)

When you’re driving and tap one of the squares, it expands to display information and reviews culled from Yelp and Foursquare, along with any available deals — say, a dollar off the Salsa Verde Shrimp Two-Taco plate at Rubio’s.

If this all sounds distracting, it can be. In the default view, I felt I was receiving too much information, and the animation as each new offer flipped into view was particularly eye-catching — not in a good way.

On the other hand, a virtual scroll wheel did let me expand the size of the map and push a couple of tiles off the screen when I was driving.

I also liked some of the audio cues, such as the warning when I approached a stoplight equipped with a camera to catch red-light runners. I admit to no wrong-doing, mind you, but the alert did help me stop trying to scoot through yellows.

As with every nav system I’ve ever used, I encountered a few quirks as well. For instance, entering the name of the unincorporated area where I live confused the system, giving me two possible destinations 30 miles apart. (In fairness, even Google messes that up.)

The other “smart” aspect of the SmartGPS, besides the offers and social-media reviews, is its ability to connect with free Magellan companion apps currently available in the Google Play store for Android devices and expected in Apple’s App Store soon for iPhones.

Using the apps, you can map an address, route or point of interest, tap “Send to SmartGPS” and upload it via Bluetooth whenever the phone and nav system are within range of each other. You can also save information to Magellan’s MiCloud service, where it will be synced with the device the next time it latches onto your Wi-Fi network.

In either case, it can be a lot easier — not to mention safer — to enter a destination ahead of time, or to have a passenger do it on a smartphone, than to try doing it while driving.

It isn’t hard to see where all this is heading. As demand for standalone systems wanes, navigation will increasingly be handled by the Cloud, connected devices and perhaps dedicated smartphone apps like Magellan’s $50 RoadMate.

In the meantime, the SmartGPS provides a useful bridge between past and future.

(Rich Jaroslovsky is a Bloomberg News columnist. The opinions expressed are his own.)

To contact the reporter on this story: Rich Jaroslovsky in San Francisco at [email protected] On Twitter: . www.twitter.com/richjaro

To contact the editor responsible for this story: Manuela Hoelterhoff at [email protected]