How international hotel chains have cut through India’s red tape Skift Take
Why build and open something brand new when you can move into an existing landmark building and free yourself from the worries of lengthy permitting and construction? Especially in a country that really needs new brands.
— Jason Clampet
Share
Tweet
Share
Post
Send

Starwood Hotels & Resorts Worldwide Inc got a 104-room hotel up and running in India in less than 12 months, bypassing years of red tape by rebranding an existing property instead of building a new one.

Capitalising on distress in the Indian hospitality sector, international operators such as Starwood and France’s Accor SA are teaming up with investors to acquire hotels from debt-laden domestic owners and reopen them under their own corporate banners.

Such conversions can help global players expand more quickly in a country where hotel construction has slowed since the downturn in 2008 as developers shun capital-intensive projects often delayed by bureaucratic and regulatory hurdles.

“This is the first time we are seeing a reasonable number of assets on the market at the same time,” said Gaurav Bhushan, chief development and investment officer for Asia Pacific at Accor. “There have been hotel assets for sale in the past but they have been more sporadic,” he said.

Slowing economic growth, an increase in the supply of hotel rooms and growing competition from foreign operators is hurting local chains such as Hotel Leelaventure Ltd Royal Orchid Hotels Ltd and Kamat Hotels (India) Ltd , which are selling assets to ease debt in a country with high interest rates.

“In India, some people are seeing the writing on the wall and are trying to get ahead of that,” said Nikhil Manchharam, vice president of acquisitions and development for South Asia at Starwood. “The debt stress levels are getting higher, triggering existing owners and operators to look for options,” he said.

International operators hope to succeed where local players have stumbled because they have deeper pockets and economies of scale that allow them to wait longer for an economic recovery. India’s growth likely slowed to a decade low in the fiscal year that ended in March.

Early this month, Starwood, in partnership with Samhi, a Delhi-based hotel investment firm backed by U.S. real estate investor Sam Zell, launched its first conversion property in India – a 104-room hotel in the western city of Ahmedabad under its Four Points by Sheraton brand.

Starwood and Accor are leading the hunt for conversion opportunities in a country where the hospitality sector is expected to grow to $36 billion by 2018 from $17 billion in 2008, according to research firm Technopak Advisors.

“You haven’t seen these conversions in India before because there wasn’t enough existing supply. The more mature a market becomes and the greater the supply added to it, you will see more opportunities for a brand change,” said Accor’s Bhushan, who has worked on similar transactions elsewhere in Asia.

Compared with building hotels, which can take three to six years in India, buying and converting them can take less than a year, reducing development risk, although conversions also require the new operator to be flexible in terms of building design. Sometimes costly improvements are needed.

In India, the supply of hotels coming onto the market tends to be best-suited to the mid-market brands of global players.

“You have to balance that to make sure the property is consistent with the brand you represent and operate in the country or it can have a negative impact,” he said.

On April 1, the purple Royal Orchid sign on the Ahmedabad hotel came down to make way for the Four Points by Sheraton logo. Samhi bought the hotel from Royal Orchid last April for 670 million rupees ($12 million) at a yield of 10.5 percent and agreed with Starwood in February to convert it.

A yield is the hotel’s annual income divided by the cost of the asset.

By comparison, the average yield on prime hotel assets across Asia-Pacific was 5.8 percent, according to a report by Savills, a UK-based property consultant.

Samhi is spending another 50 million rupees to refurbish the hotel, enhancing fire, safety and security standards and upgrading the rooms, which will be completed by the end of June.

“There is a shift from greenfield development to acquisition and if this experiment is successful there will be a flood of opportunities,” said Ashish Jakhanwala, CEO of Samhi, which has built four hotels in India and plans to develop 18 more.

Samhi is in talks with another hotel owner to take a 50-year lease on a property in the Delhi region, and another in the resort state of Goa. It is in separate discussions with Starwood and Accor to refurbish and convert the locally-branded hotels.

Return on capital employed – a measure of profitability in the hospitality sector – on acquisitions is about 13 percent over two years, said Jakhanwala, whereas in new development projects it takes five years to earn 15 percent.

Accor, which wants to add 10 hotels a year in India, said it is in talks with hotel owners in the west and south of the country to convert properties to its mid-market Mercure brand.

Starwood, which also plans to add 10 hotels a year in India, said it can quicken that pace by 20-30 percent if it can find the right properties for conversion. It has looked at 30 to 40 potential hotels since January but is in talks with owners of just two, one in the Delhi area and another in Gujarat.

“There is an opportunity for sure but when you roll up your sleeves and start digging, it gets quite complex and it does not always fit the bill,” said Starwood’s Manchharam.

In some cases the quality of construction is poor or it is badly designed, and Starwood often has to upgrade fire and safety systems to meet its standards.

“A conversion is never going to get you 100 percent of what you want. It is always going to be a compromise,” said Manchharam. “You need to see what you are willing to compromise without it having an impact on your brand.” 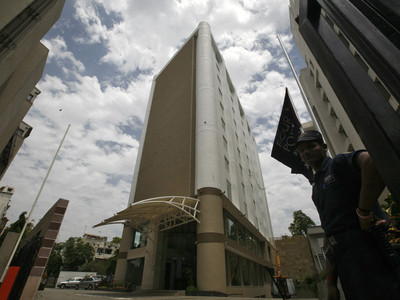 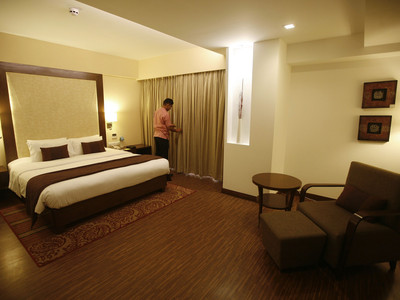 Subscribe Now
Photo Credit: An employee works at the reception of the Four Points hotel in the western Indian city of Ahmedabad Reuters