At Sterling-Cooper, then Sterling Cooper Draper Pryce, landing the big account is the focus, and there are few bigger accounts than airlines and hotel chains.

In the first five seasons, Hilton and American Airlines drove the plots of several episodes, as well as brought star Jon Hamm close to the father figure he needed.

In the slideshow above, you’ll find a breakdown of the travel accounts that drove the first five seasons of the landmark series. “You’re not thinking of putting a 150-foot statue of Jesus in Tel Aviv are you?” Don says. “Because that’s how we sold Rio.”

In an ideas meeting, Pete offers a then-novel idea: “Maybe we should exploit the danger instead of fighting it: Travel as adventure.”

Salvatore, the art director, says “The only thing this place has going for it is that the people are good looking.” The episode begins when an American Airlines Boeing 707 on its way to Los Angeles crashes shortly after takeoff from Idlewild (now New York’s JFK), killing all onboard.

Don immediately moves into damage control for their client, the small regional line Mohawk Air. “We don’t want people opening their morning paper seeing a Mohawk ad next to a picture of a floating engine,” Don says. “The rest of you stop crying and figure out how we’re going to hit the ground running in three weeks with new work.” To rally the troops on the American account Don offers a bit of inspirational talk that sounds like it belongs in a modern day American Airlines ad.

“What does that mean?” Salvatore asks. Don wins MSG’s support by telling them how they can challenge opposition to the new complex: “New York City is in decay, but Madison Square Garden is the beginning of a new city on a hill.”

That won the client, but is clearly a joke to anyone who has to travel through the station today. Conrad Hilton makes his appearance. He and Don get to know one another while hiding out behind a bar during a weekend party. Don doesn’t yet know that the father of modern hotels will become a father figure of sorts for the rest of the season. 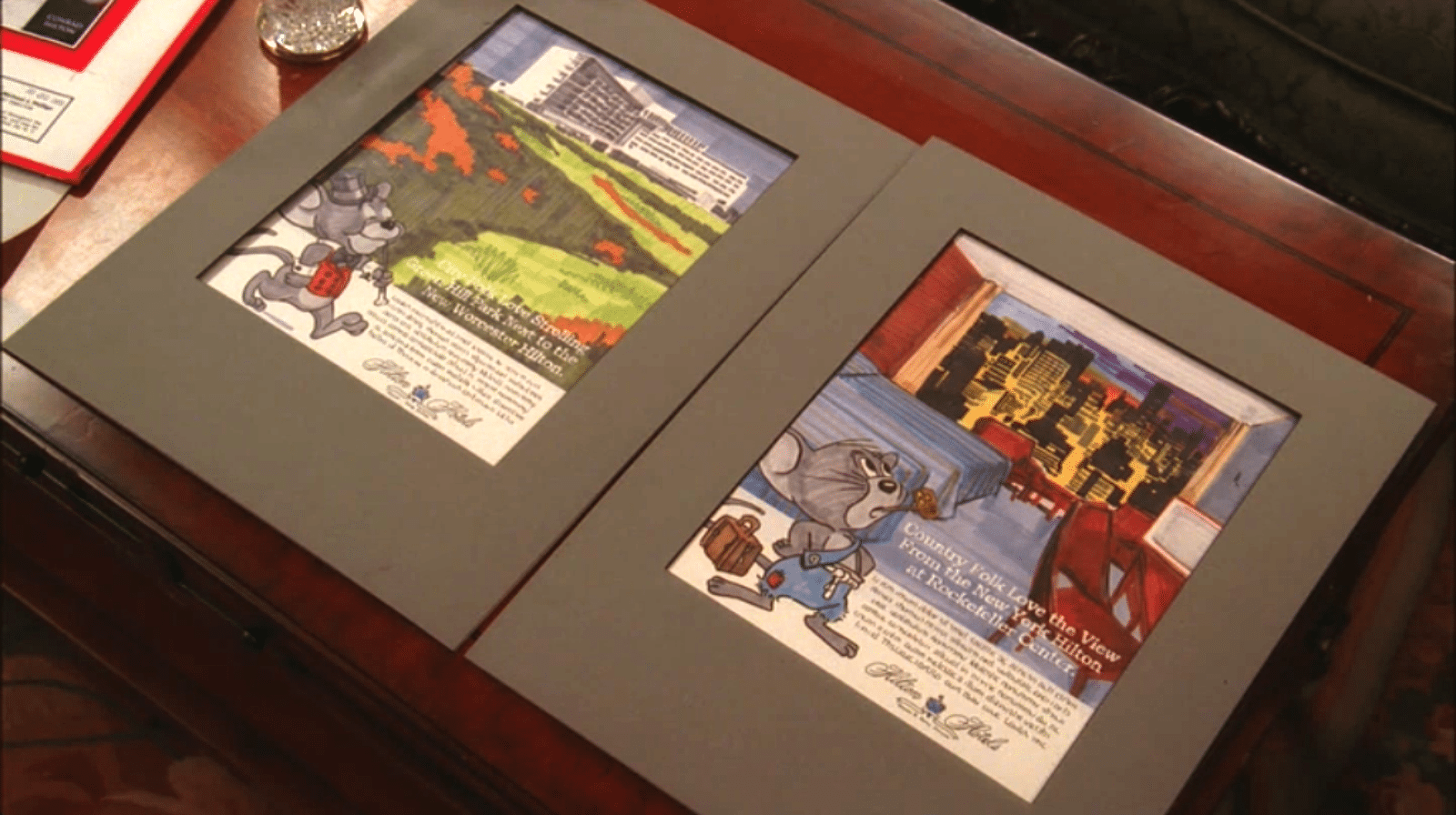 Don’s second meeting with Conrad Hilton takes place at the Walfdorf-Astoria, where Hilton pushes Don for some free advice about his new advertising campaign.

“I don’t think anybody wants to think about a mouse in a hotel,” Don says.

“Well that was my idea,” Conrad replies. “You got anything better?”

And so begins the relationship. Sterling-Cooper doesn’t win the entire Hilton contract, but they do snap up the New York properties, including the iconic Waldorf-Astoria.

“It’s not much to start with, but I look forward to sharing my dreams with you,” Hilton tells Don. To get a sense of how hotels should be run, Conrad sends Don to Rome. Betty makes excellent use of her high school Italian to flirt with, then crush the hopes of two Italians. “It’s my purpose in life to bring America to the world whether they like it or not,” Conrad Hilton tells Don in a late night meeting. “We are a force of good, Don. Because we have god. Communists don’t.”

“After all the things we threw at Khrushchev you know what made him fall apart? He couldn’t get into Disneyland.”

But Conrad and Don’s relationship comes to a head when Don fails to follow exactly what the hotel giant tells him to do. Don gives Conrad everything but the moon, but that’s exactly what Conrad wanted. The Hilton story comes to a close as Conrad tells Don that Sterling Cooper is about to be sold and he’s taking his business elsewhere.

“Some other time we’ll try again,” Conrad says before sending Don off. Travel doesn’t return to Mad Men until half-way through the season.

“We thought that ‘Samsonite’ is this very rare element, this mythical substance, the hardest on earth,” Peggy explains to Don while reviewing sketches.

They proceed to spend the night drinking, arguing, and coming up with a pitch. Travel was minor in season five, only presenting itself few times in the form of a returned Mohawk Air from the second season “Welcome back, suckers!” Roger Sterling replies. He’s unwavered by the debt the airline has taken on and an impending strike. The kick-off to the sixth season begins at a resort in Hawaii, where Don Draper is again trying to figure himself out, but fixates on his time in the Korean War.

Later in the episode, this soul-searching culminates in a rather un-Draper-like performance before clients from Sheraton Hotels. Thinking of his own experience, Don pitches Hawaii as a place for transformation taken to the extreme. It’s not just a place to find yourself, or come up with a better plan: The creative for the pitch has an empty suit laying on the beach like a chalk drawing of a murdered man.

Needless to say, Sheraton doesn’t go for it.