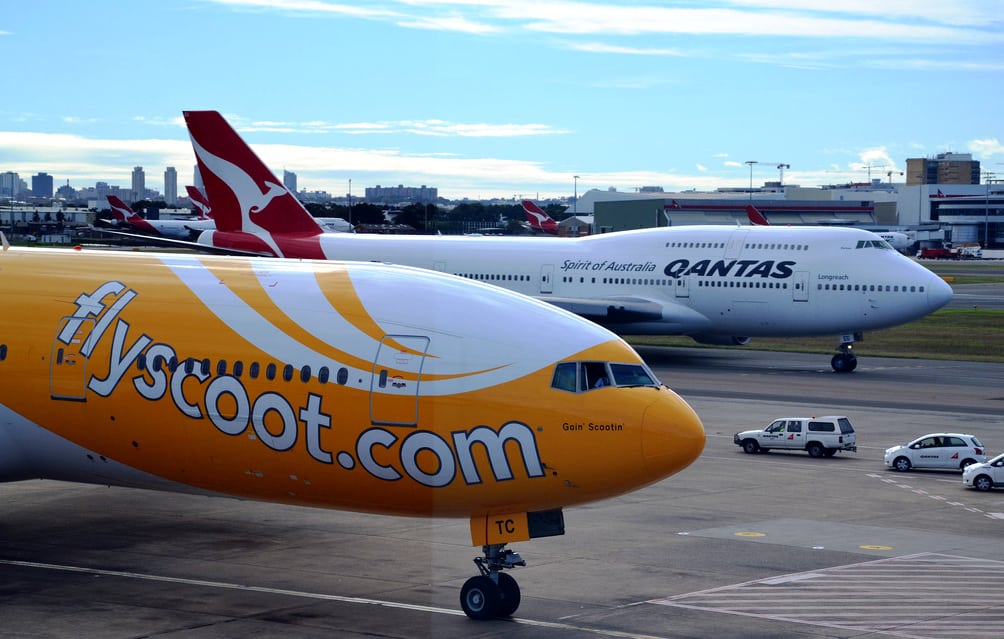 Asia’s discount carriers are so optimistic about surging travel demand in the region that they plan to add 750 new airplanes over the next decade. The airports aren’t ready.

About 50 low-fare airlines are competing with full-service carriers to boost their share of traffic in Asia-Pacific. Singapore Airlines Ltd.’s Scoot and Qantas Airways Ltd.’s Jetstar Airways Pty are among those that have ordered aircraft worth about $47 billion from Boeing Co. and Airbus SAS for delivery over the next 10 years.

With discount carriers having secured about a quarter of the region’s air travel market in the past decade, governments and airport operators across Asia must build new airfields, runways and parking bays. The region will account for 33 percent of global passengers in 2016, according to the International Air Transport Association, and HSBC Holdings Plc has said four out of five airports in Asia are operating at or above their designated capacity.

“Growth has been far greater than what the authorities envisioned,” said K. Ajith, an analyst at UOB Kay Hian Research Ltd. in Singapore. “Infrastructure is lagging. They are moving quite slowly.”

Still, Indonesian discount carrier PT Mandala Airlines, part owned by Tiger Airways Ltd., starts flights at 4:30 a.m. in Jakarta because the carrier can’t get any airport slots later in the day, said Paul Rombeek, its president director. Planes don’t return to the city until after 8 p.m. because of the congestion, he said.

The carrier also struggles to find parking bays, he said. “One of the big and crucial things in Indonesia is infrastructure — getting the right slots, getting the right access to airports, getting access to pilots,” Rombeek said in an interview. “So everybody is fighting each other over those very rare resources.”

Carriers in the region are contending with congestion at Manila and faces slot constraints in cities from Beijing to Tokyo as airport infrastructure trails expanding demand, according to Garry Kingshott, chief executive adviser of Cebu Air Inc, the Philippines’ biggest budget airline.

Budget carriers’ market share in the Asia-Pacific region rose to 24 percent last year from 1.1 percent in 2001, according to the CAPA Centre for Aviation, an industry consultancy.

Total traffic for the region will expand 6.4 percent a year during the next 20 years, according to jet maker Boeing. In that period, almost half of the world’s air traffic growth will be driven by travel to, from or within the Asia-Pacific, Boeing said.

Asia Pacific overtook North America as the world’s biggest aviation market in 2009, according to IATA. The region’s passenger growth, both domestic and international, is expected to add about 380 million travelers between 2012 and 2016 to 1.2 billion, IATA forecast in December.

That potential prompted Indonesia’s PT Lion Mentari Airlines, the nation’s biggest budget carrier, last year to sign a deal to buy 230 Boeing 737 planes worth $22.4 billion at list prices. In December, AirAsia Bhd, the region’s biggest discount carrier, ordered 100 Airbus A320s valued at $9.4 billion, in addition to the 200 it had agreed in 2011 to purchase.

IndiGo, India’s biggest discount carrier, ordered 180 Airbus A320 planes in 2011. Scoot, which operates long- and medium-haul budget flights, has contracted 20 Boeing 787s, the jet now grounded as authorities in the U.S. and Japan investigate battery fires that caused the emergency landing of one operated by All Nippon Airways Co.

Low-fare carriers in Asia are expected to have about 1,000 aircraft in their fleets by the end of 2015, up from about 600 now, said Brendan Sobie, chief analyst at CAPA, which advises airlines.

“If you think about the number of people that want to travel in Asia Pacific, there will be bottlenecks at the airports because of the infrastructure,” said Maunu von Lueders, regional vice president at IATA.

Timely development of sufficient and cost-efficient aviation infrastructure must be a priority for the region, IATA Director General Tony Tyler said in November.

“Asia-Pacific is not immune to air traffic congestion issues,” Tyler said in a statement. “These will grow acute if they are not well-managed with a regional perspective.”

Some nations have begun to act. In June, Thailand’s cabinet approved a plan to develop Don Mueang airport on Bangkok’s northern edge to reduce congestion at the city’s main Suvarnabhumi airfield, which handles about 47 million travelers a year.

Singapore has said it will build a fourth terminal at Changi airport that will help boost its capacity to 85 million passengers in 2017 from 66 million now. The airport handled 51 million passengers last year, 10 percent more from 2011.

San Miguel Corp., the Philippines’ largest conglomerate, said in September it may construct a $6 billion airport in the Manila area. The airport may take as long as three years to build, San Miguel president Ramon Ang said.

The state-owned Ninoy Aquino Airport is operating “near capacity,” IATA has said, as passenger numbers surged more than 60 percent in the past five years.

Indonesia also said in August it may invest 26.2 trillion rupiah ($2.7 billion) to triple the capacity at its main airport near capital Jakarta by the end of 2014. The development plan includes adding more runways and expanding cargo terminals at the facility.

“There will be a serious gap over the next eight years as most of the airports in the region have not decided on a specific strategy yet,” said Caspar Baum, head of aviation in Asia at EC Harris LLP. “There is a big mismatch between airline development and orders versus airport infrastructure.”