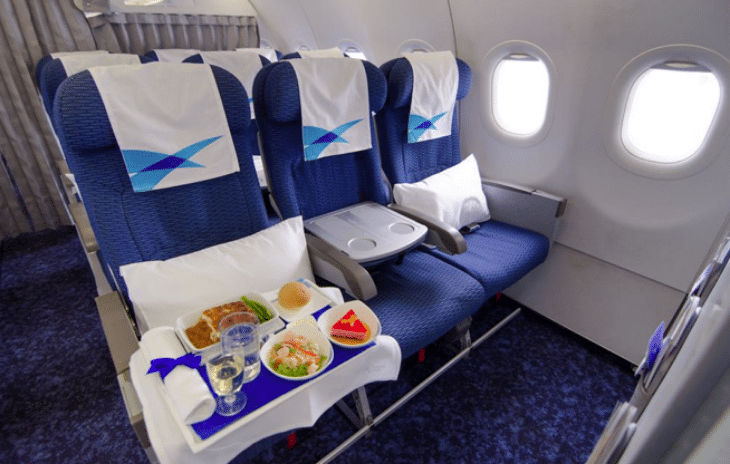 It's an unusual move by Bangkok Airways to rearrange some economy seats and turn them into Premier Class to see if the demand is there. If it works, the airline can reconfigure the aircraft on a more permanent basis.

Bangkok Airways has created an instant business class in some of its aircraft configured only with economy seats to cash in on demand from passengers requiring premium offerings.

The privately owned carrier will leave unoccupied the middle of the three seats in the first three rows on both sides of its single-aisle Airbus 319 jets.

That means there will be two seats on both sides, instead of three, providing more space for an armrest and a small add-on table.

Passengers in premier class are served with in-flight meals and beverages normally only offered in BRC, said airline executives.

They are also entitled to privileges including a separate BRC check-in counter, 30-kilogramme baggage allowance, priority baggage claim and up to 40 points on the Flyer Bonus loyalty programme.

The 12 seats in premier class will be separated by a side partition and curtain from the 120 seats in economy class.

Two out of the airline’s six A319s were not originally configured with the BRC class.

There are 12 BRC seats and 108 economy seats in those with two classes.

The airline will introduce the premier class on its Bangkok-Phnom Penh flights this Saturday after rolling out the service on its Bangkok-Koh Samui-Kuala Lumpur route at the end of last month.

Executives said the introduction of premier class is meant to meet demand from travellers willing to pay extra for more comfort and better service.

By not actually replacing the de-facto economy seats with the larger custom-made BRC seats, the airline has the flexibility to revert premium seats to economy if the market warrants.

That concept has been adopted by international airlines for domestic and regional flights where the premium passenger base swings.

“We’ll watch how receptive the market is to this premier class,” said one executive.