How are online travel stocks faring the day after Priceline-Kayak deal announcement?

The reaction has been muted, for most part, as industry players and analysts wait to see how the Priceline-Kayak deal plays out.

The morning after the big kahuna of a deal got announced in the online travel sector, how’re the stock of the companies in the sector faring. Of course Kayak’s soaring, though surprisingly the market’s muted on Priceline’s strategic move to buy it.

Nomura Securities International analyst Brian Nowak explains some concern in a note to investors saying that while this deal will help Priceline internationally and in mobile, “it’s very early and the acquisition is riddled with long-term unknowns.”

Meanwhile, another analyst Stifel Nicolaus’ Jordan Rohan believes this acquisition could crate some tension among the competitors: “Given Priceline’s successful acquisition history, including Booking.com and Agoda, investors may wonder if the industry has been out-maneuvered…we believe it could be slightly negative for Expedia. Expedia and Kayak have enjoyed a productive relationship, with Expedia accounting for one-fourth of Kayak’s revenues and powering its direct booking path, while Kayak delivers good, in-market traffic for Expedia. This balance could shift.”

Meanwhile Tripadvisor has been bandied around as an acquisition candidate ever since it went public, though unlikely it will be any of the travel industry players and more likely will be one of the big media or Internet players. 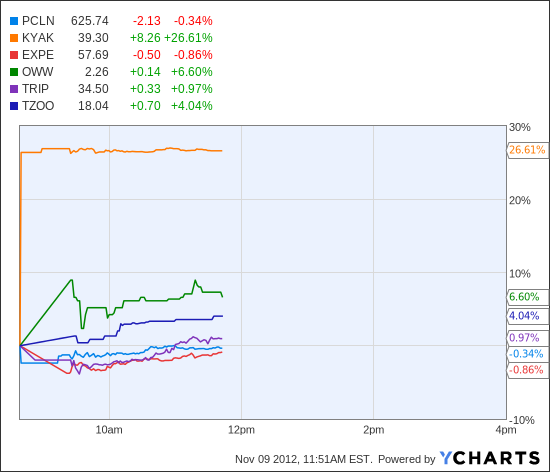