Flight cancellations on the East Coast surpassed 10,000 on Monday, but regional delays will throw a wrench into travel across the country, even if the wind hasn’t picked up there yet.

A near-shutdown of East Coast airports as Hurricane Sandy approached impacted Detroit Metro Airport this morning. Fifty-nine departures have been scrapped through 1 p.m. at Metro, according to a Free Press tally of FightStats.com data, which tracks flight status. 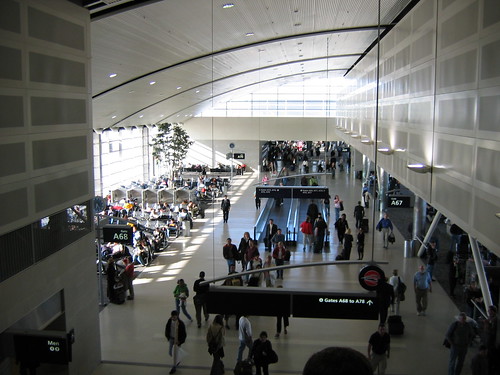 Flyers at Detroit Airport were given warning of flight cancellations as airlines suspended services along the East Coast yesterday. Photo by Ryan McLean.

Inbound flights to Detroit from most of these cities were also affected.

Nationwide, 6,644 flights in the United States have been cancelled today so far, according to FlightStats.com.

Most travelers out of Detroit were notified of the cancellations well ahead of time, because Philadelphia, New York JFK and LaGuardia, Newark, Baltimore and Washington Dulles and Reagan airports have been virtually shut down to ride out the storm.

Tuesday air travel is expected to be just as bad, if not worse, as Sandy makes landfall and its tentacles stretch all the way to Michigan.

Travelers with tickets should go online to check the status of their flights, sign up for automatic alerts by text, email or phone, and wait for travel to get back to normal in three or four days.

If an airline cancels your flight, it will automatically rebook you; you also are entitled to a refund for any cancelled flight.

The current FlightStats airport delays map this morning showed “excessive delays” stretching across the eastern half of the nation.

Even travelers whose flights are not to the East Coast should monitor their flight status. The National Weather Service warned this morning that winds in metro Detroit could gust up to 50 m.p.h. this afternoon through all day Tuesday. High winds could potentially affect airport operations.