Airline ancillary revenue hits $36.1 billion, but bag fees are only part of the equation A new report projects that global airlines’ ancillary revenue from bag fees, frequent flyer miles, and add-ons such as premium seats will rise 11.3% to $36.1 billion in 2012.

The third annual forecast of global airlines’ ancillary revenue from consulting company IdeaWorks and travel technology firm Amadeus contains a lot of interesting data, including insights about the role of bag fees. 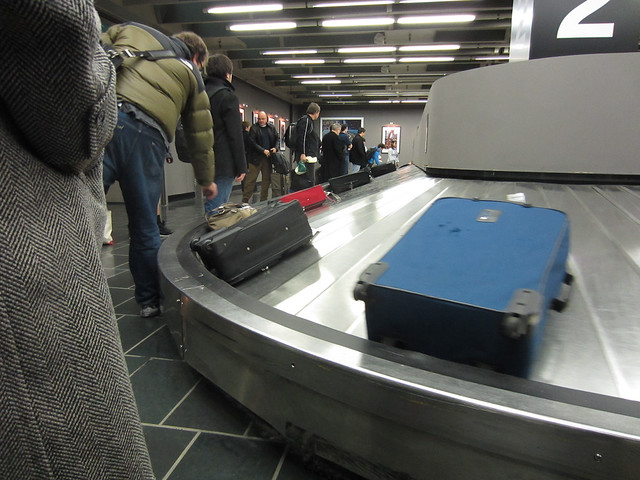 Luggage on the carousel at Boston’s Logan Airport. Photo by kbrookes.

The forecast, called The Amadeus Worldwide Estimate of Ancillary Revenue, discusses the divergent bag-fee policies of major U.S. airlines and big carriers outside the U.S.

While many U.S. airlines focus on checked-bag fees, large airlines elsewhere in the world eschew checked-bag fees, and instead collect fees for excess baggage, including fees or luggage and packages exceeding weight and size limits, according to the report.

Based on an analysis of Alaska, Delta and United airlines, the report indicates that the typical U.S. major airline took in only 20% of its ancillary revenue in 2012 from bag fees. Sales of frequent flyer miles (50%) generated the vast majority of the revenue, followed by a la carte and onboard retail services (25%), and commissions and insurance (5%).

It turns out that while baggage fees for the typical U.S. airline made up around 20% of its ancillary revenue, the report notes that baggage fee revenue reported to the U.S. DOT declined in 2012 because passengers are checking fewer bags (to avoid the fees), and airlines are handing out more bag-fee waivers to frequent flyers. The report notes “a meaningful amount of baggage revenue (not typically disclosed by carriers) is now generated by the fees paid by banks that issue credit cards. These banks make payments to the airlines for the provision of ‘first bag free’ benefits associated with a growing number of airline credit cards.” Meanwhile, what the report characterizes as “traditional airlines,” namely carriers outside the U.S., including Air Canada, Air New Zealand, Copa, Etihad, Finnair, and South African Airways, generated around 15% of their ancillary revenue from fees for excess baggage.

Among other interesting data tidbits in the report, just six U.S. major airlines — Alaska, American, Delta, Hawaiian, United and US Airways — generated $12.4 billion in ancillary revenue — or 34.3% of the $36.1 billion in global airlines’ ancillary revenue in 2012. That $12.4 billion figure decreased nominally from 2011, primarily because Delta now excludes some revenue derived from aviation-related services that it previously counted.

The report contains some self-serving verbiage from sponsor Amadeus, which operates one of the largest global distribution systems used by travel agencies.

Holger Taubmann, senior vice president of distribution for Amadeus, argues that in order for airlines to take advantage of ancillary revenue’s potential, “it is imperative that airlines adopt a multichannel approach, accessing the opportunity presented by indirect travel agency sales of ancillary services.”

In reality, airlines have divergent distribution strategies for ancillary services with some choosing to sell through travel agencies, and others deciding to maintain the sales exclusively for their own websites and call centers.

Taubmann notes that Amadeus is working with 53 airlines on strategies that would have them selling their ancillary services through travel agencies.

Here’s the announcement about the study: