The first look inside The Shard in London, the EU’s tallest building Skift Take
London is captivated with its own skyline from Primrose Hill to the London Eye and its newest addition adds a hotel, restaurants, digital telescopes, and superlative height to enhance the view.
— Samantha Shankman
Share
Tweet
Share
Post
Send

Although the Shard’s viewing platform won’t open to the public until February 1, 2013, developers behind the building today released details of the experience visitors can anticipate when they ascend to the peak of the tallest building in the EU. 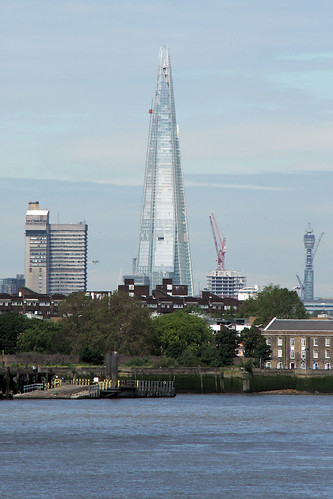 The Shard will officially open on February 1, 2013. Photo by Dave Catchpole.

Called The View from the Shard, the publicly accessible viewing spaces stretch from level 68 of the skyscraper to level 72. With the upper levels reaching 244m high, it is the highest vantage point provided by any building in Western Europe and is almost twice as high as any other viewing point in London.

The experience begins at ground level, where an as-yet-incomplete video wall will outline the inspiration behind the building and give visitors an overview of different London districts. Significant figures from the capital’s recent and distant past will appear in illustrated form throughout the area. We were shown mock-ups of a youthful Margaret Thatcher going for a ride on a tandem bicycle with Karl Marx; Benjamin Franklin using an ATM; Emmeline Pankhurst giving directions to the Spice Girls; and the Duchess of Cambridge kayaking down the Thames.

After passing through metal detectors and having their bags scanned, visitors take a lift from the ground floor to level 33 of the building, where a lobby will be transformed into a darkened area showing a sprawling, abstract map of London. Rather than using place names, different areas will be labelled dependent on what is commonly associated them. A mock-up showed ‘hipsters’ emblazened over what appeared to be Shoreditch, with ‘gourmet coffee’ hovering over another area nearby. After looking at the map, visitors take a separate lift to level 68. Lifts travel approximately six metres a second, with each of the two journeys taking 30 seconds, and lift music during the brief journey will be a score specially commissioned from the LSO.

The viewing areas can accommodate up to 400 people but organisers anticipate there will be about 250 visitors at any one time. Level 68 of the building will have its windows partially obscured to deter crowds from lingering after leaving the elevators, with the triple-height level 69 providing the main viewing space. Level 72, still under construction, will have an open roof with visitors able to see the tips of the individual shards that rise from each side of the building.

Developers claim the view stretches for 40miles (64km) on a clear day. We visited this morning when it was overcast and drizzly but the panorama is undoubtedly impressive. We were able to see far beyond central London, but it’s the view over the capital’s landmarks that is most impressive. A number of “tell:scopes” – digital telescopes with touch screens – will store information about more than 200 London attractions visible from the View from the Shard, and will also offer alternative (pre-recorded) day- and night-time views of the city.

The press preview had been due to take place earlier this week but was postponed due to it being too overcast. Visitors to the View from the Shard are asked to book their tickets in advance and refunds aren’t granted. On days when there is “zero visibility” guests will be invited to complete their scheduled visit and to return on a subsequent date for free. An exact interpretation of what can be considered zero visibility is still being finalised but the Shard marketing team has said this could be when the viewing levels are “encased in cloud” – something which happens about five times a year.

Tickets (now available via the View from the Shard website ) cost £24.95 if booked online in advance, or £29.95 if bought on the day, subject to availability. (Children will pay £18.95 in advance or £22.95 on the day.) Visitors will be have to book a specific time slot for their visit but can linger for as long as they wish – the consensus among visiting press was that you could comfortably while away an hour there. Responding to criticism that the prices are too high, The View from the Shard marketing director Laura McCarthy said the prices were set following feedback from focus groups who said they would accept those rates if it meant they could experience a premium product that would be free of queues and crowds, and if features such as the tell:scopes were included in the price. (They are.)

The View from the Shard will open from 9am-7am daily for its first four months, after which point its opening hours will be reviewed. The attraction expects to receive about 1million visitors annually but it’s not the only way visitors to London will be able to access the building. A 200-room Shangri-La hotel and spa will be positioned from floors 34-52 of the building and is scheduled to open in the second quarter of 2013. Shortly afterwards a series of restaurants will open on the 31-33 floors of the building.