Hawaiian Airlines is profiting from its growth spurt.

The state’s largest carrier, which since November 2010 has expanded into eight new markets, soared past analysts’ estimates Tuesday and posted a 77.6 percent increase in third-quarter earnings. 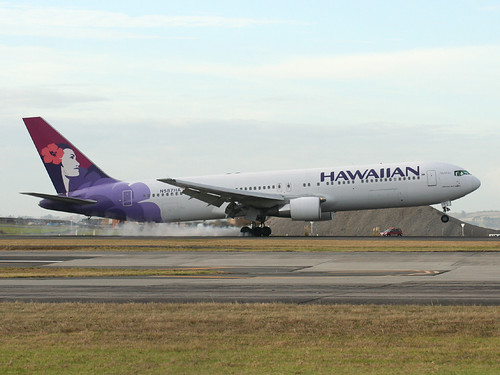 Hawaiian Airlines is committed to flying inter-island routes despite their stagnant growth. Photo by Noel Jones.

Parent company Hawaiian Holdings Inc. said net income rose to $45.5 million, or 86 cents a share, from $25.6 million, or 50 cents a share, in the year-earlier period as additional routes helped produce a 20.5 percent jump in revenue to $549.3 million.

Hawaiian President and CEO Mark Dunkerley said the approximately $100 million it costs to open a new route has been paying off.

“Our earnings for the third quarter continue to show the strategy that we’ve been pursuing has been a success,” Dunkerley said in a telephone interview. “Hawaiian Airlines has long recognized the need not only to grow, but also to diversify our sources of revenue geographically. The introduction of the new fleet of Airbus A330s has enabled us to put this in practice with our expansion in Asia.”

Excluding fuel-hedging activities, Hawaiian’s adjusted net income last quarter was $40.6 million, or 77 cents a share. That beat analysts’ consensus forecast of 71 cents, according to financial research firm Thomson First Call. The stock rose 12 cents to $5.37 on Tuesday. The earnings were released after the close of trading.

Hawaiian, which has posted 14 profitable quarters in the past 15, began its rapid expansion nearly two years ago with nonstop service to Tokyo’s Haneda International Airport. It subsequently added routes in Japan to Osaka and Fukuoka, and on Tuesday will launch service to Sapporo. Since 2010, Hawaiian also has added routes to Seoul and New York, with service to Brisbane, Australia, scheduled to begin Nov. 27 and to Auckland, New Zealand, set to start on March 13.

“They’re doing as good or better than anybody,” said analyst Bob McAdoo of Los Angeles-based investment bank Imperial Capital. “They’ve got their own little part of the world they operate out of, and they’ve found a bunch of niches that other people weren’t paying attention to and they’re making it work.”

Hawaiian is hoping to add service between Haneda and Kona. Dunkerley said he expects to hear within the next three weeks whether his application with the U.S. Department of Transportation for the Haneda-Kona route is accepted.

“Our timing for our growth has been very good, and we certainly hope — as we are only a third to half of the way through our strategy — that the remaining portion will go as well and as smoothly as the first portion,” he said.

“It’s still the early days for almost all of our routes, but I’m very pleased with the results of the region as a whole,” he said.

The North America operation, which accounted last quarter for 47 percent of Hawaiian’s passenger revenue, was mixed with added competition from other carriers — such as Alaska Airlines — putting pressure on some of the routes, he said.

“The Bay Area and Southern California has seen a lot of new service, and, consequently, those are the markets where it’s been tougher sledding,” Dunkerley said.

Interisland service continues to be a drag on Hawaiian’s operations.

“That market has been a bit of a disappointment to us,” Dunkerley said. “We’ve provided a lot of extra seats but haven’t seen demand grow at the same rate, and that has adversely affected our financial performance. But this is an important part of what we do. We’re absolutely committed to flying between the islands in the state, and it will be a little time before we can calibrate things to where it’s appropriate.”

Hawaiian plans to start a new turboprop service to smaller airports in the second half of 2013 and will eventually operate with four to six ATR 42s turboprops, which seat from 44 to 50 passengers. “We’re very focused on providing service to Molokai, Lanai and West Maui,” Dunkerley said.

Despite Hawaiian’s financial success, its shares have fallen 7.4 percent this year, which remains a sore spot.

“We’re all frustrated” with the low share price, Dunkerley said. “We’ve built a terrific franchise in this business. We’re heading in the right direction, and it’s frustrating that all of the good things we’ve done have not been recognized yet by the market.”

Hawaiian continues to build up cash and at the end of the quarter had $433.5 million, but Dunkerley didn’t indicate whether the airline is planning any acquisitions or stock buybacks.

“We constantly evaluate the level of cash we have on hand to make sure it’s appropriate to our business plan,” he said. “With five Airbus A330s coming in 2013 and several more in 2014, having some cash to help finance these aircraft has been something that we think is important.”

Fuel costs remained high in the third quarter even though the airline’s average cost per gallon of jet fuel fell 4.1 percent year over year to $3.04. With a 28 percent increase in seating capacity, overall fuel costs (which include taxes and oil) increased 21.9 percent to $165.8 million and represented 34.9 percent of total operating expenses.