This survey information should be used to market deals for vacations dates far in the future, but kept far away from last-minute airfare booking sites.

Three out of five women in the survey confessed to hating surprises and a third said they would hate it if their partner suddenly sprang a short break on them. 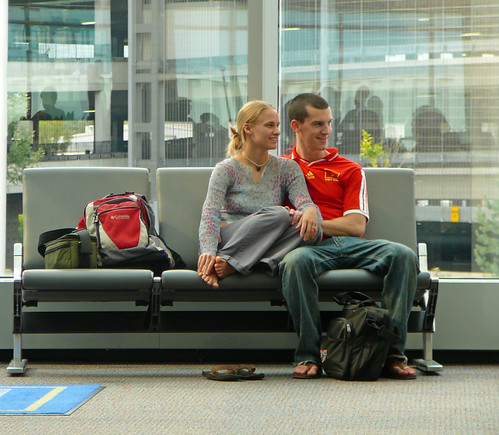 The average women needs seven days, eleven hours, and three shopping trips to get ready for a vacation. Photo by Melvin Schlubman.

But that may be just as well, because the average woman is treated to just two romantic trips from their partner during the course of a relationship, the research found.

The typical woman wants seven days and 11 hours notice before even the shortest break, plus three shopping trips, according to the study of 2,000 women.

A fifth of those who had been whisked away on a surprise getaway felt that their enjoyment had been affected because they were not given enough notice. Necessary activities before leaving home included planning outfits, packing, sorting out work and cancelling other arrangements.

Women said at least nine outfits were needed for a short break. One in four said forgetting something in the hurry to leave had spoilt their time away.

The research, commissioned by British Airways, found that women needed more than 12 hours to get ready to go away.

But one in four said a romantic trip away “just wouldn’t cross their partner’s mind”.

The same proportion claimed their partner’s idea of being spontaneous was getting a takeaway meal.

Abigail Comber, the head of brands at British Airways, said: “This research emphasises how much importance women place on getting preparation for a trip exactly right.

“The element of surprise is clearly a dividing issue among British women.

“But what has emerged is the enjoyment of going away is enhanced if they feel they have been given enough time to get excited.

“They want to leave knowing things will be OK while they’re gone.”

Sophie Bailey, 33, from Southampton, Hants, who was whisked away to Morocco by her boyfriend, said: “It was a really sweet idea to celebrate our first year together but really I hated it.

“He packed my bags so I had all the wrong clothes and my hair straighteners had been left behind.

“I had to grin and bear it because the trip showed he cared, but it was awful.”