Virgin Rail gets its wish to continue running West Coast line, but only for 13 months Skift Take
Virgin’s small success in temporarily getting the line back hasn’t resulted in a long-term contract, but rather a new bidding process. And thirteen months of political meddling are likely to be as much fun as these last few months.
— Samantha Shankman
Share
Tweet
Share
Post
Send

The London to Scotland line could see three different operators in as many years after Transport Secretary Patrick McLoughlin said his department will negotiate a temporary management agreement with Sir Richard Branson’s Virgin Rail, which is expected to last between nine and 13 months. 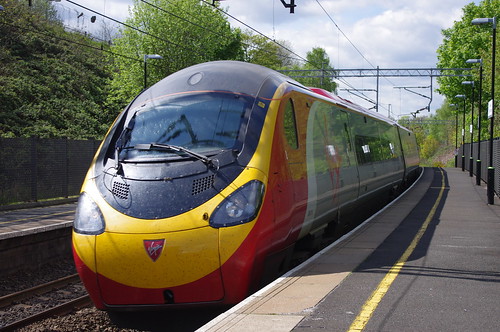 The London to Scotland line will continue to run after December 9 on Virgin rather than a state-run rail. Photo by Joshua Brown.

Ministers will then award a two-year interim contract, which will be open to bidders from the rest of the rail market, before the franchise is re-let on a long-term basis.

Mr McLoughlin said the arrangement, which was described as “lunacy” and a “muddle” by unions and rail operators, was the best way of ensuring the London to Scotland services continue to run after December 9, when the current franchise agreement expires.

The Transport Secretary has had to walk a legal tightrope after the original competition for the West Coast franchise was scrapped in an extraordinary reverse a fortnight ago, following the discovery of “significant technical flaws” in the way the process was handled by government officials.

FirstGroup had been awarded the franchise in August after offering to pay more than £13bn over 15 years.

All other franchise competitions, including Essex Thameside, Great Western, Thameslink and East Coast have been locked in the waiting room until the outcome of two reviews, one into the West Coast fiasco and a second into the wider franchising programme. The latter, which is being carried out by Eurostar chairman Richard Brown, is not expected to report until the end of the year.

The Department for Transport (DfT) said it believed a temporary management contract with Virgin would be “completely compliant” with European Union procurement law but experts disagreed, warning the Government was walking in shady legal territory.

Stuart Cairns, a procurement expert at the law firm Pinsent Masons, said: “I don’t think they will be immune to challenges because of the sheer volume of it [the contract]”

Mr McLoughlin is thought to have weighed the threat of legal action against the potential chaos of transferring the line to the state-backed Directly Operated Railways with less than eight weeks to go before the current franchise expires.

It is understood FirstGroup won’t challenge the Virgin award although the transport giant is still reviewing other options, including suing the DfT for losses incurred after ministers pulled the competition.

However, lawyers suggested questions could be raised by the European Commission itself.

A spokesman for the DfT would not comment on whether the Government had consulted the EC on its plans for the West Coast franchise.

“We are not going to discuss our legal advice,” the spokesman said.

Mr McLoughlin said the cancellation of the West Coast franchise was “deeply regrettable” and apologised to both bidders and taxpayers for his department’s errors, which are expected to cost at least £40m.

“My priority now is to fix the problem and the first step is to take urgent action to ensure that on the 9 December services continue to run to the same standard and passengers are not affected,” the Transport Secretary said.

“I believe Virgin remaining as operator for a short period of time is the best way to do this and my officials and I will be working flat out to make this happen.”

He told Parliament the DOR would continue to “stand ready” should it be required to step in on the West Coast line.

Rail operators conceded that the Transport Secretary was stuck between a “rock and a hard place” over how to solve the West Coast crisis but described the arrangement as a “complete muddle” which would likely lead to a lack of investment on the line over the next three years.

“It’s hard to bid for a two year franchise because what can you achieve during that time?” said one rail boss.

Bob Crow, leader of the RMT rail union, branded the deal with Virgin a “short term political fix” that would allow Sir Richard to laugh “all the way to the bank”.

Both Virgin Trains and Stagecoach, which are joint venture partners in Virgin Rail, declined to comment on the potential financial terms of a deal but Sir Richard has previously proposed putting management fees towards charitable causes or green energy projects.

Gerald Khoo, transport analyst at Espirito Santo, warned there could be knock-on consequences for some of the other franchises on hold, if the process drags beyond current contract expiry dates. “We see the potential for collateral damage,” Mr Khoo said.