Waiting for a Grand Canyon rafting permit? Get off the waiting list and into the lottery The switch to a lottery system six years ago has doubled the number of private launches and given applicants a one-in-eight chance each year, although some rafters are reaching a 20-year wait.

The Grand Canyon boasts some of the most spectacular views in the world, revealing a rich geological history that few ever see from the Colorado River that formed it millions of years ago. 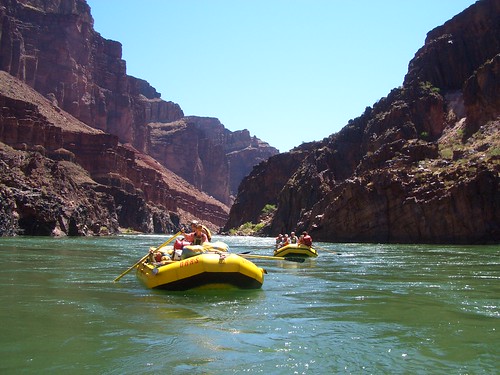 Commercial trips are easier to book, but the price starts around $3,000. Photo by Jennifer.

Those eager to watch rare animals emerge from the cliff sides, camp under the stars and get an adrenaline rush as they soar over rapids must get a permit if they want to lead one of hundreds of the trips available through a lottery each year.

One in eight will get one — a dramatic shift from a system that once had applicants waiting up to 27 years for that chance. While it’s a gamble that results in more losers than winners, the National Park Service and rafters say there is renewed hope for those wanting to run private trips.

“Most people have some pretty good hope for this,” said Steve Sullivan, river permits manager for Grand Canyon National Park. “In the old way, it squashed that.”

Grand Canyon National Park has collected six years of data on the lottery system since it made the switch from the waiting list in 2006 and doubled the amount of private launch opportunities. Paying a rafting company for a commercial trip leads to a much faster launch for those wanting to snake down hundreds of miles of the river, and joining another private river trip could, too.

But people like Tony Petrocco see value in picking his own crew and charting his own journey. He’s a carry-over from the waiting list and has been favored in a sense to win through the lottery, gaining extra points by transitioning. If he doesn’t participate in a river trip by 2020, the Park Service will step in and boost his chances by either tripling his points or letting him pick a launch date within five years.

By that time, he’ll be in his 60s, and will have waited 20 years for a permit. He’s trying to cut that time short by applying for the lottery, looking for other trips to join and closely watching for cancellations. He just hasn’t had any luck yet.

“You have to proactive versus digging your head in the sand,” said Petrocco, of Marble, Colo. “It’s a crapshoot, but what are you going to do?”

The Park Service conducts the lottery every February for launch dates the following year. The one in eight odds for the lottery don’t factor in additional drawings held when trips are canceled or unclaimed and often have repeat applicants. Of the 449 launch opportunities for private boaters in 2013, nearly 3,630 applications were submitted. Additional trips were reserved for those who transitioned from the waiting list, which is down to 3,000 from 7,300.

About a quarter of applicants for private trips are from Colorado, followed by California, Arizona and Utah.

Wally Rist, who has logged 53 trips on the river and is president of the Grand Canyon Private Boaters Association, said flexibility is the key to getting a trip by teaming up with someone who already has a permit or picking the less popular dates. September has the highest demand.

“Even if it weren’t a lottery, no matter what, there are just too many people who want to go on a river trip to think they all have a right to get a private permit,” said Rist, of Olathe, Kansas.

Allane Brine, of Prince George in the Canadian province of British Columbia, also transferred from the waiting list to the lottery system but favors the list. Brine believes it provides more certainty in a launch date that would work best for her family, which happens to be in the more popular months.

“Chances of me and my family ever going to the Grand Canyon are now slim to none with this new system, unless we go with a commercial company and pay an absolutely ridiculous price,” Brine said.

Commercial trips can cost more than $3,000 a person, but the pricing depends on the season, the length of the trip and other things. The nearly 600 launch opportunities are allocated to businesses that contract with the Park Service and can include up to 32 people.

Private trips can last up to 25 days and have up to 16 passengers. Participation in either trip is limited to once a year.

Dave Mortenson, of Kent, Wash., chose a date less desirable for most during the winter after he transferred from the waiting list. Icicles formed as water splashed on the shore, and the ropes on the boat were frozen during the trip, which he said was beautiful nonetheless.

His wife met him at the end of the trip and told him she had won a permit as a first-time applicant under the lottery system. They set out again earlier this year in much warmer weather.