Will hotel development spell the downfall of Quirimbas Archipelago? Skift Take
The challenge of delivering a consistent experience for visitors is on factor that leads to distinctive destinations like the Quirimbas to transform to suit outsiders. How this remote location meets the challenge will determine its future.
— Jason Clampet
Share
Tweet
Share
Post
Send

A tense start at Dar es Salaam airport. A combination of infuriating bureaucracy, confused directives and sudden situation-saving kindness gave us just seconds to catch our connecting flight to Pemba in Mozambique, though we had arrived at the airport from Heathrow three hours earlier.

“Immigration made you buy a visa when you were in transit?” asked our Italian pilot Paolo, laughing loudly. “That’s a new one. I tell you, if you haven’t parted with all your money, lost your luggage, got arrested or been turned into an elephant by a witch doctor, you’ve won the race.”

“How long have you lived here?”

“Thirty five years. I’ve loved all of it.” 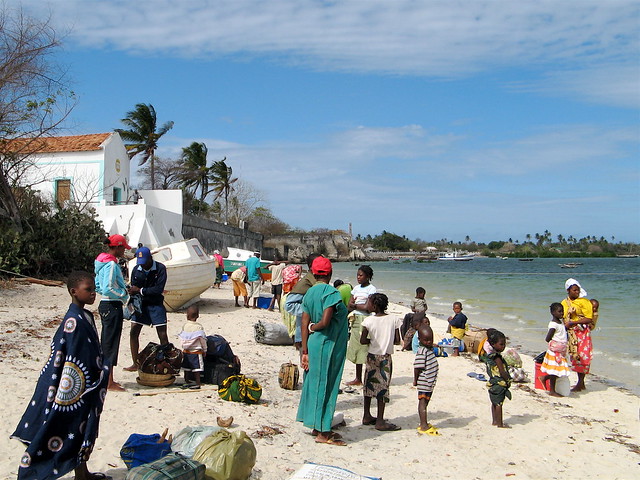 We needed to calm down, and the remedy lay in Paolo’s plane revving up in front of us. Once aboard the Cessna Caravan, we soon relaxed as we flew south above the wild, tropical Indian Ocean coast, spilling its shallows and sandbars into the emerald, translucent sea. Next came the almost unbroken chain of just-offshore coral islands (32 in all): islets, reefs, baixos (sunken islands) and tiny shards of white-hot sand that make up the little-known, untrammelled Quirimbas Archipelago.

Seen from 4,000ft, the shapes and colours were mesmerising. Knots of land, thick with mangroves, ringed by white sand, spread their coral skirts beneath water so clear that you can almost see the turtles, Napoleon wrasse, morays, puffer fish, nudibranchs and bumphead parrotfish that help to make the Quirimbas one of the world’s top diving destinations.

But if you can’t quite see the fish from the sky, you can certainly see the fishermen, poised like herons with their nets and hand lines, scattered across these vast shallow coral reefs, working by day and returning to their villages on the mainland, or camping on the islands by night. Sprinkled across the sun-splattered water are their dugouts and pointed dhows, each with a billowing makeshift sail.

Their sight is a reminder of the story of the Quirimbas, occupied by Arabs from the 10th century, later controlled by the Portuguese, from whom Mozambique gained independence in 1975. Some of the islands are permanently inhabited; others are simply bases for fishermen. Most are simple in the extreme, a few have a natural water supply, and some are beginning to offer places to stay, as are places on the mainland, close by. Time to cease hovering between heaven and earthly paradise, and to explore.

The creation of a young English couple, Amy and Neal Carter-James, Guludo Beach Lodge lies on a wonderful, untamed eight-mile long mainland beach within the Quirimbas National Park, the largest marine protected area in Africa, incorporating the southern islands and also a sizeable chunk of mainland coast and hinterland. Guludo, reached by speedboat or adventurous 4WD ride, stands as a beacon of socially responsible tourism. Local villagers constructed the whole place, including the nine very attractive guest bandas, using natural materials, from the floor tiles and basketwork windows to the compostable loos with views of sea and stars, and Heath Robinsonesque but effective hot-water showers.

Locals make up the majority of the staff, some of whom are the beneficiaries of a scholarship programme begun by Nema, Guludo’s associated charity, which has made major, visible improvements in education and health for these poorest of people.

With paraffin lamps instead of electric lights and water in bottles instead of taps, we lacked for nothing in this eco-paradise. Everything, sometimes on a wing and a prayer, worked. The food was delicious and the beds were comfortable.

We snorkelled and picnicked on uninhabited Rolas Island, watched for game from a lookout across a textbook African landscape, and toured Guludo village and its new school (courtesy of Nema) surrounded by giggling, bouncing children. Like the faces of many of the women, mine had been whitened with a paste made from the powdered bark of the inciro tree, used to moisturise the skin.

Staying at authentic, inspiring Guludo, we felt pampered and rested, but also as if we were making an effective contribution.

Only four Quirimbas islands were permanently inhabited before 1975, the most important of which was Ibo. Here the Portuguese, as well as many Indian traders, held sway. Ladies in big skirts strolled under their parasols on the esplanade; there were fine houses, several banks and an airy square shaded by Indian almond trees. And there were three forts, the largest of which, star-shaped São Baptista, was the heart of darkness both during the boom years of the slave trade and the much more recent fight for independence, when the Mozambique secret police, PIDE, serially imprisoned, tortured and executed within these walls.

Post independence, the island instantly lost its status, reverting to the fishing community it once was, and gradually became the easy going, crime-free place it is today, its handsome pastel-painted buildings, wrapped in strangler figs, crumbling gently in the sun.

Now there’s a resurgence, slow but sure, in this enigmatic, compelling place. Traditional silversmiths occupy shady corners of São Baptista, foreign benefactors and enthusiasts are restoring buildings, and attractive guesthouses have opened up. First to arrive was Ibo Island Lodge, set in three fine high-ceilinged mansions and furnished with antiques. The manager, Rob MacKenzie, takes interested guests on an absorbing historical tour of the old town.

Each island is different, which makes travelling their length so rewarding. There’s no history on Quilálea, a tiny dot of an island, but plenty of nature: delicate frangipani and massive baobab trees, exotic birds and tropical fish. Superb snorkelling is right there in front of you at Azura, the island’s only habitation, with nine luxurious individual villas for guests. Opened a year ago, it’s a stylish, carefully orchestrated place (South African, not Italian, as I first thought), where guests are moved to different spots each time they eat. Lunch one day was at a table set for us on lovely Turtle Beach, which we had to ourselves, apart from the fish eagles and the turtle nests, before walking home.

If Quilálea is jewel-like, Vamizi, seven miles long and half a mile wide, offers beach life on a much more sweeping scale, with an army of staff, secreted in the forest behind the lodge, bent on creating an unforgettable experience for its bewitched guests.

There’s more than a whiff of glamour, a hint of White Mischief about the elegant, elevated, open-deck drawing room and the 13 romantic guest villas, spread languidly along a bold and spectacular beach. Each one is as big as my house, with huge beds, swathed in billowing nets, that dreamily face the ocean.

You’ll put away your shoes on Vamizi, but you’ll dig out your lipstick before joining your (not infrequently famous) fellow guests at the bar and, much later, dining at candlelit tables on the sand.

As for our days on Vamizi, they were orchestrated with the lightest of touches: lazing for hours in the perfect temperature; humpback whale watching; thrilling game fishing for him; a healing treatment on our veranda for me; solitary picnics at white-clothed tables in astonishing beach locations – just us, a cool box of drinks and a lobster salad, and nothing and no one else but coral, water and shell-strewn, icing-sugar sand.

One day we paddled kayaks along a beautiful silent estuary, water so clear that it felt as if transparent film had been stretched between the mangroves to encase the tropical fish lazily gliding beneath. Another morning, the sea turned red: the region’s healthy coral was spawning, a sight that much of the world no longer witnesses.

Like Guludo and Quilálea, Vamizi has been leased from the Mozambique government, in this case to a group of British and European shareholders. We made an instructive and impressive tour around its villages with Anne, a social anthropologist charged with developing charitable, cultural and social responsibility in an effective, non-invasive way (alongside Maluane, Vamizi’s ongoing marine ecology project). But it’s a fine line that’s being trod in this hitherto innocent paradise: the wealth that’s beginning to seep into the archipelago is undoubtedly beneficial; but the wealthy don’t always tread lightly, and in Vamizi’s case the 20 or so private luxury villas that are being built will have to be strictly regulated, hopefully with minimal Western-style trappings of luxury.

The true luxury of the Quirimbas Archipelago is its fragile beauty and the unspoilt charm and dignity of its inhabitants.

British Airways (0844 493 0787; ba.com ) flies from Heathrow to Dar es Salaam from £684 return. Vamizi Island operates transfer flights to the Quirimbas Archipelago, landing at Vamizi and Pemba and, on certain flights, on Ibo, Matemo and Quirimbas islands. A return flight from Dar es Salaam to Vamizi costs £310; timetables at vamizi.com/your-journey.

Africa Odyssey (020 7471 8780; africaodyssey.com ) offers six nights at Vamizi Island and one night at Oyster Bay from £4,200 per person, based on two sharing, including international and internal flights, transfers, most activities and accommodation on a full-board basis. Other options are available. A combination of Ibo and either Vamizi, Azura or Guludo, for example, makes an excellent two-centre pairing. Ibo Island Lodge offers dhow transfers to Azura, as well as dhow safaris, as does Vamizi.

Best are the winter months, between May and September, although the summer season brings only brief, intense showers. Diving and snorkelling are good year round, as is game fishing. Humpback whale sightings are most common between August and October. Bird watching is best in November and December during the hot, rainy season.

Because night falls very early here, Azura and Vamizi have both put their clocks forward by one hour to create Mozambique time, which is two hours ahead of GMT.

All hotels except Guludo have Wi-Fi and all have mobile phone reception.

The villagers of Guludo make and sell particularly pretty palm-leaf bracelets, and on Vamizi, they make colourful place mats. Ibo is known for its long tradition of silverwork jewellery.

Mozambique is the world’s 35th largest country – about the same size as Turkey.

Characterful guesthouse in a charmingly converted colonial building on Ibo (00258 8232 66771; cincoportas.net ; doubles from £60 per night).

With a shady garden and a first-floor terrace for watching the spectacular sunsets and eating the five-course dinners (269 60549; iboisland.com ; from £206 per person, per night, full board).

Chic stopover in Dar es Salaam, with excellent food (01932 260618; theoysterbayhotel.com ; doubles from £276 per person, per night, full board and including airport transfers).