Greece is trying to figure out how to repair its image in the eyes of U.S. tourists Skift Take
American tourist numbers have dropped more than other countries, but is it because the image of protests pushes them away or is the threat of disruptions a final straw in a country already known for transportation difficulties?
— Samantha Shankman
Share
Tweet
Share
Post
Send

U.S. arrivals to Greece have fallen in the past couple of years, even as the number of overall visitors to Greece increased 10%, Greek authorities said here Tuesday. 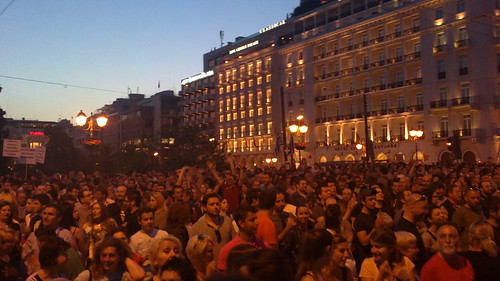 Greece’s Minister of Tourism met with former New York Mayor Giuliani to discuss how to repair the country’s image. Photo by Christina Kekka.

As protesters in Athens held demonstrations against the arrival of German Chancellor Angela Merkel, a team of officials from Greece’s tourism and development ministries were here spreading the word that their country is safe for tourists and open to tourism development.

Greece’s tourism sector has been very resilient to the country’s fiscal crisis…but despite the record numbers, officials are concerned about the drop in U.S. visitors, from 600,000 in 2010 to a projected 500,000 this year.