Skift Take
If anything, decades of dictatorship should have given Egypt the power to cut through red tape and execute on complicated development projects. The new government is banking on a desire for change — and a few billion for the Qataris — to make it happen.
— Jason Clampet
Share
Tweet
Share
Post
Send

Straddling one of the world’s great sea routes, the Suez Canal corridor is set to become a bridge connecting Africa with Asia if a grand plan by Egypt’s new government comes to fruition.

President Mohamed Mursi’s administration is reviving and expanding a series of projects initiated in the late 1990s under former President Hosni Mubarak to turn the banks of the Suez Canal into a world trading and industrial centre, hoping it will earn billions of dollars and address a growing unemployment crisis. 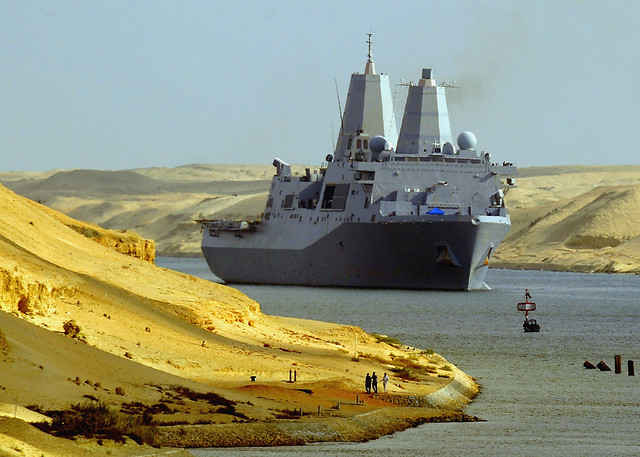 The plan aims to transform the corridor along the 100-mile length of the canal from an area of mostly flat, empty desert into a major world economic zone.

The waterway, the main thoroughfare for the transport of cargo between Asia and Europe, is a vital source of revenue for Egypt. But Egyptian planners believe a lack of vision and poor administration have prevented the country from maximising its location at the crossroads of two continents, something they wish to address by expanding transit facilities and slashing red tape for investors.

Goods worth $1.6 trillion a year pass through the canal, or 10 percent of the world’s total shipped goods, said Ashraf Dowidar, a consultant who has been studying the project. “We’re only getting $5.4 billion of this, through the tolls of the ships going through.”

“Ships don’t want to stop to do anything here. So this is the lost opportunity we have. If they can make them stop, at least do maintenance, do repair – a logistics area – then the whole thing will move,” said Dowidar, who until recently worked for the Ministry of Trade and Industry.

The government is targeting annual revenue of $100 billion from the canal in several years’ time, as new projects come on stream and old ones are expanded, he said.

The canal zone was heavily bombed during Egypt’s wars with Israel. Suez, at the canal’s southern end, is now a depressed industrial town that saw some of the most violent protests during the uprising that ousted Mubarak in February 2011.

Egypt began developing an industrial and port complex at the northern end of the canal near Port Said in the late 1990s, and a second at the southern end.

The government will soon create a single authority for the corridor’s development to cut through its own red tape, said Walid Abdelghaffar, a government coordinator for the corridor project. The authority’s chairman will have the rank of deputy prime minister and report directly to President Mursi.

Once established, the authority will quickly start drawing up a master plan to combine all the various elements around the canal under one administrative entity to make it easier for investors and to implement policy without excessive bureaucracy.

“We dream that the whole of Egypt might become a logistics centre and I think the ministers have this vision,” Abdelghaffar said.

The government is also putting the final touches to the first highway connecting the country with Sudan and another highway across the Nile Delta that connects Port Said with Alexandria and beyond to Libya.

The canal, which opened in 1869 to great fanfare and which has twice been closed since World War II due to war between Egypt and Israel, is operated by the Egyptian government through the Suez Canal Authority.

Revenues from the waterway linking the Red Sea with the Mediterranean rose 3.6 percent to $5.2 billion in the financial year ended June 30 and are a key source of foreign currency for Egypt’s economy, along with tourism, oil and gas exports and remittances from Egyptians living abroad.

Mursi, a U.S.-educated engineer, is under pressure to revive the economy, which has been hammered by political turmoil, and tackle domestic problems, including rising unemployment, which triggered the uprising against Mubarak.

Officials say Egypt’s unemployment rate is running at about 13 percent but is double that for recent entrants into the workforce. As well as creating jobs, the government, which is running a budget deficit of 11 percent of GDP, needs to find more revenue sources.

Pledges of support for the Suez Canal corridor project are already flowing in. Qatar last month promised $8 billion for gas, power, and iron and steel plants at the northern end of the canal over the next five years.

Egypt has long been challenging for investors. Entrepreneurs struggle to find the talent they need in a creaking education system, face mounds of paperwork and must often bribe bureaucrats to keep businesses afloat.

The World Bank ranked Egypt at 110th place out of 183 economies in the world in ease of doing business in 2012. It was especially poor in the speed of granting construction permits, enforcing contracts and resolving insolvency.

Abdelghaffar, a consultant to the housing ministry, which has taken a leading role in the project, claimed the grand plan for the canal would mean that “the investor who comes knows what his rights and responsibilities are and what the rights of the government are.”

Deputy ministers for defence, interior, housing, industry, transport and investment, each with a direct stake in the corridor plan, would join the authority, he said.

Most of the financing would come from the private sector, and foreign governments, companies and investors were overwhelmingly supportive during meetings with the Egyptian government.

“All the investor wants is an authority he can deal with, clear laws, protection of his rights, and that he knows his responsibilities,” Abdelghaffar said.

“You might be surprised by this, but we aren’t suffering at all for finance,” he said. “There are parts that have to be financed by the state. It has been allocated for in the budget.”

Early projects instigated under Mubarak in the late 1990s included a 35 sq km port at the northern end of the canal zone, named East Port Said. It was designed partly as a transit hub for containers to be unloaded from giant cargo ships passing through the canal for distribution on smaller ships around the Mediterranean. Behind the port lies a separate, 37 sq km industrial zone.

At the southern end, Sokhna Port has already become the main cargo port of Cairo, which lies 120 km away via a specially built highway. Nearby lies a 12 sq km industrial zone where factories already operate, including ammonia and fertiliser plants.

Between the two complexes, near the city of Ismailia half-way down the canal, the government is working on yet another zone, called Technology Valley, to attract high-tech industries and a university.

Projects underway or planned include a second vehicle tunnel under the canal, the dredging of a new channel at the canal’s north entrance and the expansion and completion of roll-on, roll-off, multiple-use and bulk liquid terminals, bunkering facilities and a new basin and quay.

The industrial zones are also being expanded.

Dowidar believes the corridor’s potential is huge and would easily attract investors if unnecessary bureaucracy were eliminated.

“You don’t need a lot of work to attract a lot of investment,” he said.

Egypt and Saudi Arabia resurrected a $3 billion-$4 billion project earlier this year to build a bridge across the Strait of Tiran that would allow vehicles to drive from the African continent to Asia without going through Israel, whose border with Egypt is closed to most traffic.

For now vehicles cross the Strait by ferry.

The Saudi side has approved the plan, said Abdelghaffar. “I think within months something will be announced about it.”

A high-speed train to connect Port Said and Suez with Cairo is also on the drawing board.