Skift Take
Kusturica established himself as a filmmaker before the Yugoslav civil war and despite his global success became tied to the Serbs. His authentic Serb village in a formerly multi-ethnic town won’t do anything to improve his standing.
— Jason Clampet
Share
Tweet
Share
Post
Send

Turning his back on the 19th-century Spanish cafe, Emir Kusturica loped into the street where a Byzantine tower is to be built, over the way from the Ottoman houses with their screened balconies. A breeze ruffled the long, tangled strands of his uncombed hair.

“If you had said there could be a multiplex in Visegrad,” he said, waving a hand towards the half-built cinema where workmen were coming and going, “they would have said you were fucking crazy.”

Confused? A lot of people who come here will be.

In one of the most beautiful spots in the Balkans, the former Yugoslavia’s most celebrated film director was showing the Guardian around his most ambitious and controversial project to date – a town within a town that will echo in wood and stone the region’s greatest work of fiction. 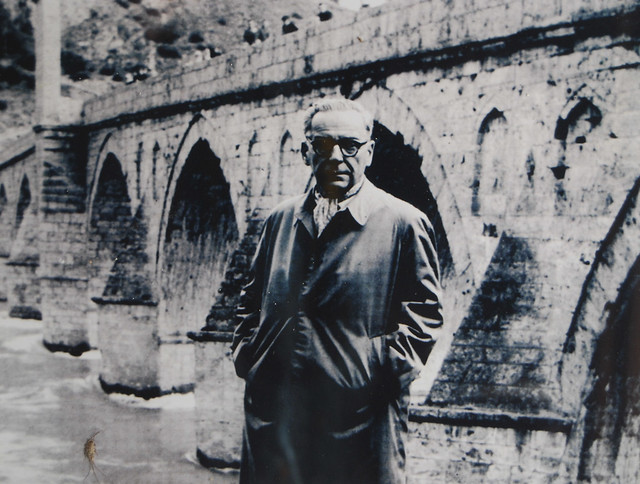 Archival photo of author Ivo Andric and the Bridge over the Drina. Photo by Brenda Annerl.

Published in 1945 by the Nobel laureate Ivo Andric, The Bridge on the Drina tells the violent story of Bosnia through events on and around Visegrad’s magnificent 16th-century Ottoman bridge.

Kusturica said he first had the idea for the project when he stopped in the town during his honeymoon in 1978. When it is finished, his mini-town – on a spit of land between the Drina and a tributary – will have about 50 buildings. There will be an Ottoman caravanserai, an Austro-Hungarian academy of fine arts, an Orthodox church, a bookshop, a new town hall, a hotel, a marina, a helipad and an opera house in which Kusturica plans to stage the premiere of a work he is writing, based on Andric’s masterpiece.

The Spanish cafe, which looks on to a broad square, dominated by a statue of the author, is a nod in the direction of Andric’s admiration for his fellow chronicler of suffering and inhumanity, the Spanish painter Francisco Goya.

Andricgrad, as it will be known, is due for completion in 2014. It is a joint project between Kusturica, who has a 51% share, and the government of Republika Srpska, the Serbian half of Bosnia and Herzegovina. He previously built Drvengrad in Serbia, a traditional village also known as Küstendorf, where he filmed Life is a Miracle.

“I am putting into this village all the money I made from films and music,” said Kusturica who, as well as being a film director is also an accomplished bass guitarist.

He is coy about the overall cost, which local media have put at between €10m (£8.1m) and €12m. All he would say was: “It will cost less than most shopping malls these days.”

But controversy swirls around the project – and what exactly Kusturica is trying to say with it. Is it just a sort of Bosnian Serb theme park? He maintains that his aim is to teach Bosnia’s Serbs about their past, including the bits they do not like.

“The bridge survived because of its beauty. But [otherwise] people here let everything that reminds them of the past be destroyed,” he said.

Given the brutality of Balkan history, that is hardly surprising. For Bakira Hasecic, a native of Visegrad and the founder of the Sarajevo-based Women Victims of the War, the bridge on the Drina is “the bloodiest bridge in the world”. Andric would probably have agreed. One of the earliest scenes in his book is a detailed account of an impaling.

More recently, Visegrad was the scene of some of the worst atrocities in Bosnia’s 1992-1995 war. Hasecic, who was raped at the police station, has been refused permission to erect a plaque on the bridge to the memory of those who died. The plaque would have said that about 3,000 people were killed on or near the bridge – a claim disputed by Serbs.

Hasecic is horrified by Andricgrad, noting that much of Kusturica’s fantasy town will occupy the site of a sports centre that was used as a detention camp in the war. Many of her friends and relatives left it, never to be seen again. Before the war, Visegrad was more than 60% Bosniak. Today, it is 95% Serb.

Kusturica is a particularly controversial figure because he was born into the Bosniak (predominantly Muslim) community, but renounced Islam and aligned himself with the Serbs. However, he insists he is not a nationalist.

“Nationalism, for me, is part of the last century,” he said. “I strongly believe that nations are better when they live together.”

But the way Kusturica tells it, it is his Bosniak critics who are chiefly responsible for the destruction of the multicultural society that existed in Bosnia under communist rule.

“These people who attack me don’t want a multi-ethnic society. They want their own domination,” he said. Asked if he was equally critical of Serbian nationalists, Kusturica replied: “Absolutely. I think both sides are doing what the conditions they produced are locking them into doing.”

Hasecic also denied she was a nationalist. But she pooh-poohed Kusturica’s claim to a multicultural vision. “He has never, for a single second, shown any interest in the plight of the non-Serbian population,” she said.

In Visegrad, an elderly Bosniak stands at the highest point on the bridge, a favoured spot for executions down the centuries. He said he had four bullets in his hip from the war. Seventeen years after it ended, he was still living in communal accommodation, because his house was damaged in the conflict and he had never had the money to rebuild it.

Upriver, where the teal-green Drina drifts lazily through ravines mottled at this time of year with the yellow and russet of trees in autumn leaf, once-Muslim villages still bore the signs of destruction. Nearby, there were strikingly big cemeteries with conspicuously white headstones.