Skift Take
The brand that’s the first to earn Chinese loyalty on the road is on its way to long-term success as the high spending demographic is growing and new enough to still pick favorites.
— Samantha Shankman
Share
Tweet
Share
Post
Send

We often hear about the increasing spending power of the middle classes that are emerging around the world, especially in relation to those in China, but one area where this is really manifesting itself is in luxury travel. The waves of Chinese tourists now travelling the world are reshaping the industry as airlines, hotels and brands scramble to make them feel welcome and offer them the comforts of home.

Here are just a few recent examples of brands that are rolling out the ‘red carpet’ for these new economic emperors by tailoring their products, services and experiences for high-spending Chinese tourists’ tastes and needs: 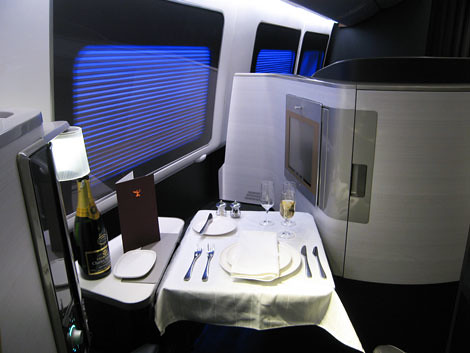 British Airways launched its new first class cabins on a flight to Shanghai instead of New York. Photo by Speedbird_NCL.

In June 2012, Harrods launched a Chinese-language smartphone app, offering shoppers functions such as an interactive guide to the London department store, restaurant menus, the latest Harrods news, and details of events taking place within the department store. The app is free to download and was launched alongside Harrods’ new Mandarin-language e-commerce site.

British Airways rolled out their new ‘next generation’ first class cabins on flights between Shanghai’s Pudong Airport and London’s Heathrow – previously it would have been traditional to launch this service on the London to New York route. The new cabins include seats that convert into 1.98-meter beds, a 15-inch screen to watch in-flight entertainment on, leather-bound desks and the option to invite a fellow passenger to dine with them, using an extra seat.

In January 2012 Amsterdam’s Schiphol airport released a Chinese version of the Schiphol app, which is available for iPhone and Android. The free app offers information on aspects of the airport such as flights, public transport and product offers, as well as maps of the departure lounges in Mandarin. The app also enables translation of signs in the airport, via a text recognition system using smartphone cameras. A similar app for the Charles de Gaulle airport in Paris is also available.

March 2012 saw the InterContinental Hotels Group announce the launch of Hualuxe Hotels & Resorts, a hospitality brand designed to cater specifically to the Chinese market. The name is derived from “Hua” meaning “majestic China” in Mandarin, and “luxe” which represents the brand’s luxury positioning. Hualuxe properties will be opened across China from Q4 2013 (and internationally at a later date), with Chinese-inspired designs and tailored facilities such as tea houses, locally inspired menus and late-night noodle bars.

Lola Pedro is a senior industry analyst at London-based trend firm trendwatching.com . One of the world’s leading trend firms, it monitors and reports on emerging consumer trends, insights and innovations. You can follow its latest reports on Twitter @trendwatching .