Skift Take
Complexo de Alemao has promoted favela tourism to generate revenue despite the cultural implications of foreigners peering in on their poverty, but this grassroots effort exemplifies a better way to bring about change.
— Samantha Shankman
Share
Tweet
Share
Post
Send

A powerful television producer has been photographed on the toilet. If that weren’t bad enough, the picture was immediately posted on the internet, and the producer’s reputation is quickly going down the tubes. It’s a powerful allegory, a tale for our times. Fortunately for the audience of Rio schoolchildren watching, it’s also a film, being played out by a cast of sock puppets. 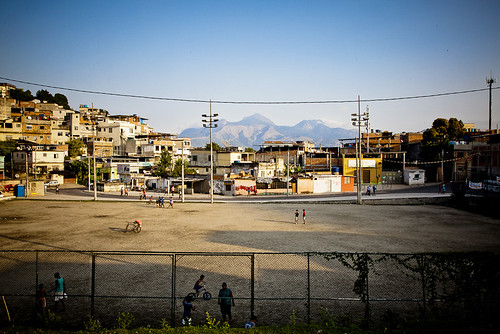 Photo by Circuito Fora do Eixo.

It’s called 31 Minutes Or Less, and by the end of the movie the producer has got his dignity back. The 90 or so primary-school students are watching this local production as part of an official, government-subsidised day off. It’s hard to tell what they make of it, but going to the pictures is not something these kids have much experience of. They’re from the Complexo de Alemao, formerly one of Rio‘s most notorious districts, and this visit is to the city’s first favela cinema.

CineCarioca Nova Brasilia, to give it its full name, is located halfway up the hillside on which Complexo de Alemao squats. In between two public squares, the building overlooks a run of cramped but well-maintained streets and has just one screen, showing films in both 2D and 3D. The fare is mainstream, a mixture of Brazilian and foreign movies with an emphasis on the blockbuster (its biggest box-office take this year was for The Avengers). It sells cheesy bread balls in the foyer. From the outside, it looks like nothing more than a miniaturised Vue, but its appearance belies its significance.

Less than two years ago, Complexo de Alemao was a fiefdom, a district of 60,000 people ruled by drug gangs notorious for their brutality. Residents were effectively under curfew, the police notable only by their absence and any interlopers who sought to relay what was going on inside the district were at risk of losing their lives, as happened most infamously to Globo TV journalist Tim Lopes.

Standing outside the cinema, Sergio Sa Leitao recalls what the favela was once like. As CEO of the distributor Rio Filme, he funded 31 Minutes Or Less and drove through the CineCarioca project. “It was a very scary place,” he says. “You had to have a guard to come in, and even taking a photo meant you risked being shot. There were roadblocks at the bottom of the hill and you were forced to get out of your car and walk. The gang members would line the streets, pulling up their shirts to show you they were armed, to let you know who was in charge.”

The gangs’ reign ended suddenly on 26 November 2010 when the army, in the first step of a systematic “pacification” of the favelas, invaded Complexo de Alemao. It was a bloody battle, leaving as many as 50 people dead. But it was not as bloody as it might have been: the gangs chose largely not to fight but to flee. They knew what was coming, and in part this was because people like Sa Leitao had been visiting the area, laying groundwork for the civic changes that would accompany the imposition of order.

Even then, Sa Leitao found that people were receptive to the idea – and in the most unlikely places. “I would come up and visit the site to see how things were progressing,” he says. “It was dangerous, you had to be very careful. One of the main drug-dealing areas was in the square where we planned to build the cinema. One day, a junior gang member approached me and said ‘the man up there’ wanted to speak to me. In Brazil, that phrase normally refers to God, but in this case it was his boss, which shows you how they thought of themselves. I went over and spoke to him. He said that he would tolerate the cinema, but on one condition: ‘You have to show Elite Squad 2.’ ”

When the cinema opened within a month of the pacification, Elite Squad 2 – a tale of police fighting, gangs, militias and corruption on the streets of Rio’s favelas – was not on the programme. People came to the cinema anyway. In its first full year, CineCarioca sold 74,000 tickets, an estimated 91% of those coming through the doors having never been to the cinema before. It also brought in a small number of jobs, with the cinema’s 11 staff all recruited locally.

The effect on the community extended more broadly, too. The cinema was followed by a school for training in audio, visual and digital skills. The square on which the cinema sits was reclaimed by the community as a public space. Bars and restaurants have opened up around it, and there’s a football pitch next door. When a drunken fight one night last year ended with one of the cinema’s glass doors being smashed, 300 people formed a protective vigil around the building until the glaziers came.

The pacification of the favelas sought to break the stranglehold of the gangs, but it also served a socio-economic purpose in this resurgent country: bringing the favelas back into the fabric of the city proper. The CineCarioca project is part of this process, and while it offers aspects of normality to formerly chaotic neighbourhoods, it also hopes to boost the Brazilian film industry. This is where Elite Squad 2 comes in again. Part-funded by Rio Filme, it is the biggest Brazilian movie ever, selling 11m tickets and being exported around the world; the director, José Padilha, is currently in charge of the new Robocop movie). More favela cinemas, Sa Leitao believes, will mean more big receipts. That also means more money to reinvest in new infrastructure: a virtuous circle. The second Cinecarioca opened this month in the Meier favela.

Critics will observe that simply opening a new space in which to screen Resident Evil: Retribution (also currently showing at CineCarioca) is not necessarily a panacea. Also, despite subsidies that mean tickets retail at four Brazilian reals, rather than the downtown average of 12, as well as the thrill of the new, occupancy rates at CineCarioca are still below 60%.

Mara Cidinho, waiting for her five-year-old daughter, Kana, after 31 Minutes Or Less, is clear about what she thinks of CineCarioca. “Has the cinema changed things in Alemao?” she said, her eyes widening. “Obviously it has. There was nothing like this here before, nothing. Now there’s shops and restaurants, it is a good place to live. Before, people wanted to leave, but not any more.” When asked what films she would like to see there, she was equally adamant: “Oh, definitely the final part of Twilight.”