For years, Rio de Janeiro’s bohemian neighborhood of Lapa has been a hotspot for people seeking samba shows and late night partying. But recently, the area has also started hosting a different kind of crowd.

Once every two months, Lapa becomes home to “Geeks on Beer,” a happy hour networking event for tech entrepreneurs and investors. The meet-up includes a session of speed-networking, a round robin of meetings during which 15 startups have five minutes to woo investors into setting up another encounter. 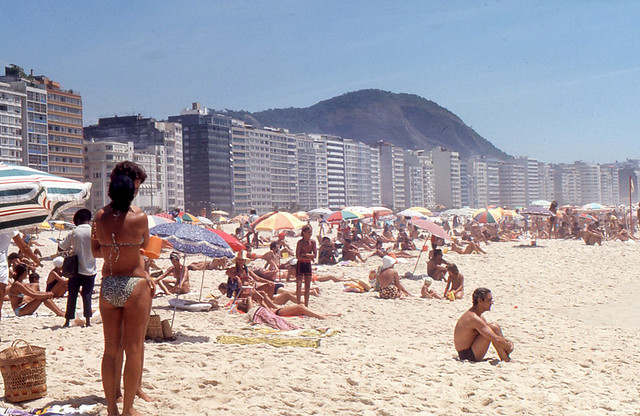 “The romance with my investors started at Geeks on Beer,” said Brunno Galvão, co-founder of O Holandês, a group-buying website with headquarters in Rio.

Events like Geeks on Beer are becoming frequent in Rio, a sign that its Internet startup scene is on the rise. Investors and entrepreneurs are trying to capitalize on Brazil’s Internet boom and make Rio its next startup capital, or at least offer serious competition for São Paulo in Web innovation.

To reach that goal, they face many obstacles, such as the rising cost of real estate and a dearth of experienced talent.

But city officials are behind the effort and see it as another chapter of Rio’s economic revival. In August, Rio Negocios, the city’s investment promotion agency, held a conference in London to promote opportunities in Rio’s tech industries, claiming the title of “Silicon Beach.”

“Rio has a mix of characteristics which we think could make it the main hub for digital entrepreneurship in Brazil,” said Antonio Carlos Dias, commercial director at Rio Negocios.

There are reasons to believe the push will be a success. Rio already boasts sophisticated technological infrastructure for Brazil’s oil and gas industry, is home to top-notch engineering schools, and offers an appealing, laid-back lifestyle for young entrepreneurs.

The city has already produced some noteworthy success stories, such as Hotel Urbano, Brazil’s No. 1 site for travel and accommodation booking, and Peixe Urbano, a Groupon-style deals site. Peixe Urbano was founded in 2010 and received financing from Benchmark Capital and General Atlantic. It now has 20 million registered users in Brazil, Mexico, Chile and Argentina.

“We opened some doors for other startups that now come to us for advice,” said Leticia Leite, a Peixe Urbano executive.

That growth is expected to continue as Brazil’s bulging middle class keeps expanding and a government-led push to extend Internet access bears fruit.

“We have an enormous internal market that is just getting started,” said Marcelo Sales, a partner at 21212, a new digital accelerator with offices in Rio and New York that provides seed money, mentoring and infrastructure for startups.

“It’s a fantastic moment for Brazil, it is really at an intersection point,” said Yann de Vries, founding partner at Redpoint e.ventures.

In addition to its encouraging market conditions, Rio graduates many of Brazil’s top engineers. It hosts 22 business incubators and accelerators and has increasingly become the Brazilian destination of choice for private equity firms.

Brazil’s second-largest city has a population of 6.5 million and is also home to state development bank BNDES and the oil and gas industry, including national oil company Petrobras. It hosts research and development centers for General Electric, Halliburton, Baker Hughesand Schlumberger. And Cisco Systems Incplans to open an innovation center in Rio.

“Rio definitely has the ability to be a tech hub,” said Robert Chefitz, managing partner at Egis Capital Partners, a private equity firm in New York. “The technical infrastructure that supports Petrobras, or BNDES, provides the backbone for emerging businesses.”

Rio has shown that it is no longer just a tourist destination and that it can profit from the qualities that make it Brazil’s “Cidade Maravilhosa,” the marvelous city. Stunning views and beautiful beaches are an advantage when recruiting the foreign expertise needed to build a healthy startup environment.

The city’s popularity is gaining momentum as Rio prepares to host the 2014 FIFA World Cup and the 2016 Summer Olympics. Other than adding allure, the events will attract further investments and should lead to infrastructure improvements. By 2016, Rio Negocios says, the city will have the fastest fiber network in Brazil.

Rio has already started attracting young graduates from top universities in the United States, where the tech market is more saturated and competition is higher.

“I was seeing that there weren’t a lot of people here with my background and that I would have an advantage,” said Ilya Brotzky, a Cornell University graduate from Canada and co-founder of Zona Universitaria, a social platform for students.

Rio’s startup scene still faces many challenges, and may need more support from the local and national governments. Backing could range from tax incentives for companies to bold reforms aimed at lowering labor costs and streamlining bureaucracy.

“With the right kind of support, hubs can start anywhere,” said William F. Miller, co-director of Stanford University’s Program on Regions of Innovation and Entrepreneurship. “But you need to have a good seed and also a good soil.”

City incentives could include developing affordable co-working spaces. The average price for office space in Rio’s central business district is $92 per square foot, around $12 more than in São Paulo, according to real estate adviser Cushman & Wakefield Inc.

Rio may also not be the best location to launch an ecommerce business. Its consumer market is much smaller than that of São Paulo, which is one of the world’s largest metropolitan areas and has better infrastructure to support distribution of goods.

On top of local challenges, companies must also grapple with the notoriously high cost of doing business in Brazil. High taxes, intricate bureaucracy, and generous labor rights make it hard to live by the popular “lean startup” mantra.

The tech scene could also be held back by high technology costs and Brazil’s expensive but slow broadband.

Getting past early stage funding

A shortage of local funds with the deep pockets and expertise needed to invest in growing tech startups has made it hard for Brazilian companies to raise capital to expand.

The outlook seems to have improved in the past 18 months, with increased activity by international investors. In August JP Morgan said it would invest $45 million in Dafiti, a leading Brazilian online retailer. But very large deals are still rare.

Like elsewhere in Latin America, many of the larger investments have gone to “internet copycats,” companies that replicate successful business models of U.S. startups and adapt them to the needs and limitations of the local market. The strategy, also known as “tropicalization,” lessens the inherent risks of investing in startups in emerging markets.

The biggest roadblock for Rio, experts agree, remains the lack of seasoned entrepreneurs and the difficulties of importing experienced talent from abroad, a challenge common to all sectors of business in Brazil.

Still, Rio’s startup crowd is confident that the city and Brazil will become serious players in the world’s technological revolution.

“When I talk to investors I describe this as relatively high risk but also inevitable,” said Benjamin White, another partner at 21212. “I like a bet that’s inevitable, then it’s just a question of what the timing is.”