Skift Take
It’s clever to create a virtual network of bikes that don’t need to be docked in one place; however, the built-in GPS requires users to have a smartphone, which eliminates half its potential customers.
— Samantha Shankman
Share
Tweet
Share
Post
Send

Social Bicycles (SoBi), as SmartPlanet’s Channtal Fleischfresser explained, have a built-in GPS that allows users to locate, reserve, and unlock a bike with a smartphone app. When you’re done? Just ride up to a nearby bike rack and return the bike with your phone. Like other bikeshare systems, though, there are bike stations, or hubs. If you return the bike outside the hub you are charged a fee. 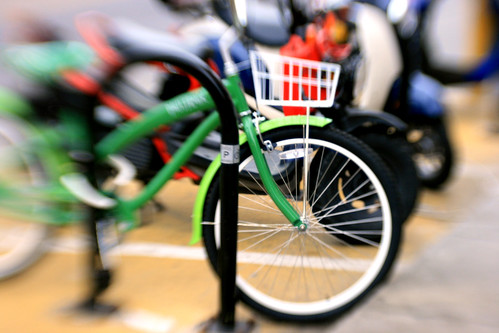 Turns out you need a smartphone to do something as simple as ride a bike these days. Photo by Quinn Dombrowski.

If someone then uses a bike that’s outside a hub and returns it to a hub their account is credited. And to make sure that all the bike aren’t ridden outside the city, if someone returns a bike outside the larger system zone they are charged a higher fee.

The company, which plans to launch later this fall in Buffalo, N.Y., Sun Valley, Idaho, and San Francisco, announced today that AT&T will be the system’s exclusive mobile internet provider.