U.S. travel to Cuba is back up and running with 2-year travel licenses Skift Take
Many operators thought they were going to have to wait until after the election to know their fate, but the government unexpectedly — and somewhat randomly — started handing out renewals last week.
— Samantha Shankman
Share
Tweet
Share
Post
Send

American travel to Cuba, which has surged and dwindled through decades of political ups and downs, may soon be surging again.

The key, veteran tour operators say, is the end of an apparent logjam in the handling of travel licenses by the U.S. Treasury Department’s Office of Foreign Assets Control (OFAC). That office is responsible for issuing and renewing the licenses that educational tour operators must have before they can sell Cuba tours to Americans. 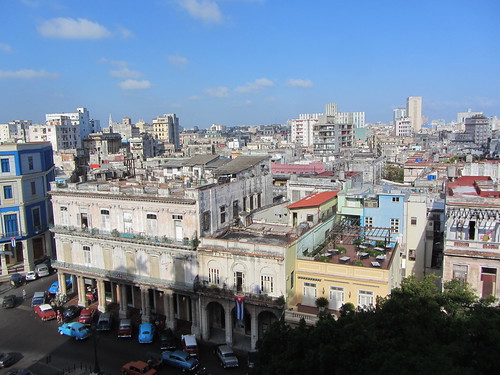 Many American tourists are still stuck in limbo if the organization they booked with is on the waiting list. Photo by Stephen Colebourne

The Treasury Department explicitly excludes trips that are “primarily tourist-oriented.” Tour operators that fail to meet guidelines face civil penalties of up to $65,000 per violation.

Less than two years ago, President Obama set off a mini-boom in Cuban travel by relaxing restrictions on “people-to-people” educational trips aimed at promoting “meaningful interaction between travelers and individuals in Cuba.”

After an initial burst of trips — and complaints from U.S. Sen. Marco Rubio (R.-Fla.) alleging “rampant abuses” and frivolous itineraries — Obama’s Treasury Department tightened restrictions in May, forcing cancellations and delays that put dozens of educational group trips in doubt.

In late September, however, the tide appeared to turn, tour operators say.

One of the more dramatic cases was that of Insight Cuba, a major educational tour operator, based in New Rochelle, N.Y. Rubio accused the tour operator of running trips that were too laden with music and dancing to qualify as proper educational exchanges. When the company’s Cuba license expired in late June and OFAC officials didn’t approve a renewal application, Insight Cuba president Tom Popper said he laid off 22 staffers and the business was in peril.

But on Sept. 28, Popper said, OFAC renewed the license. By Tuesday, the company was taking reservations again, and Popper was forecasting 100 departures in the coming year, taking as many as 3,000 travelers to the island nation.

That’s a decrease of 50 departures from the booming business Insight Cuba did last year, Popper said, but still a relief after the uncertainty of the summer.

“They didn’t give me an explanation, and I didn’t ask,” said Popper, referring to the Treasury Department. “Cuba is always politically charged. Our programs were incredibly enriching and rewarding and fully compliant… I’m not sure if we’ll ever know what happened.”

Meanwhile, at the World Affairs Council of Philadelphia, vice president for travel Joan Russell said she got a phone call on Sept. 28 from OFAC officials saying her organization would receive a two-year extension of its Cuba license.

In a politically sensitive program that has operated on a year-to-year basis, that appears to be a rare coup.

“This is the first anybody’s heard of a two-year license,” said Janet Moore, owner of Long Beach-based Distant Horizons, a travel service provider that works with the Philadelphia group and has operated people-to-people programs in Cuba for Harvard alumni, the Santa Barbara Museum of Art and about 15 other U.S. academic and arts groups in the last year.

Spokespersons for OFAC did not respond to emails and phone calls Monday and Tuesday.

Many other educational travel groups are still warning customers that their Cuba trip plans depend on renewals not yet granted. The traditional peak season for Cuban travel begins in November, when temperatures cool.

The slowdown began May 10, when the U.S. Treasury Department stiffened the requirements for the renewable licenses that allow educational tour operators into Cuba. In September, Jeff Braunger, program manager for OFAC’s Cuba Travel Licensing program, wrote in an email that the application process was tightened “because of reports we received” about licensed trips failing to meet government standards.

Some organizations did receive renewal of their licenses, including Elderhostel’s Road Scholar program, Grand Circle Foundation and the UCLA Alumni Assn. But others have endured a summer of waiting.

At National Geographic Expeditions, which has 17 Cuba trips tentatively planned between November and June 2013, the website today labeled those trips “wait list only.” A note added that these trips would “operate subject to renewal of our People to People license by the U.S. Department of the Treasury.”

Still, “there’s movement now. And unlike what some of us thought, they’re not waiting for the election,” said Moore of Distant Horizons. Of her many partners, Moore said, only the Philadelphia group, the UCLA alumni group and the Center for the Study of Cuban Culture and Economy had received licenses renewals by today.

The World Affairs Council of Philadelphia, which has previously offered academically oriented trips to such destinations as Iran and North Korea, had planned three trips to Cuba between November and January. But its license was due to expire Sept. 30, and it was within weeks of having to scratch its first departure on Nov. 10.

Now, Russell said, that trip will happen with 21 travelers. A second departure will follow on Dec. 1 and a third in January.

Until the most recent renewals, Moore said, she was estimating that up to 20 groups with lapsing licenses might have to scrub their Cuban plans. The number of Americans on Cuban people-to-people trips, she said, seemed likely to fall from more than 10,000 in the last year to less than half that.

Treasury Department spokesman John Sullivan said in early September that “the program remains robust,” and Braunger said the department had issued about 140 licenses to people-to-people tour operators since early 2011. He added that “we are doing our best to process both first-time applications and requesting to renew existing licenses.”

The island nation, a favorite American vacation destination in the 1950s, has been largely off-limits since Fidel Castro’s Communists took over, prompting the U.S. to announce a trade embargo in 1962. President Clinton approved people-to-people trips and loosened restrictions in the 1990s. President Bush cut back the trips in the 2000s. President Obama loosened some restrictions for students and religious groups in early 2011 and others later.

But in late 2011, Rubio denounced the oversight of the program, quoting two Insight Cuba trip itineraries and their frequent mentions of salsa-dancing and meetings with Cuban government representatives.

Saying that the program “borders on indoctrination of Americans by Castro government officials,” Rubio called for reforms and said that the confirmation hearing of Roberta S. Jacobson, Obama’s appointee to the post of assistant secretary of State for Western Hemisphere Affairs, could make a fine opportunity for more discussion of the subject.

On March 23, the Miami Herald reported that Rubio had dropped his opposition to Jacobson. On March 30, Jacobson was sworn in. Six weeks later, OFAC tightened the people-to-people travel requirements.

The office responsible for these licenses has a small staff, noted the World Affairs Council of Philadelphia’s Russell, and “I think they’re under a lot of pressure.”