The cruise industry has defended its employment policies after an investigation by Channel 4’s Dispatches highlighted low wages and long working hours.

The programme’s producers arranged for an undercover reporter to spend five weeks working on board the cruise ship Celebrity Eclipse, operated by Celebrity Cruises. 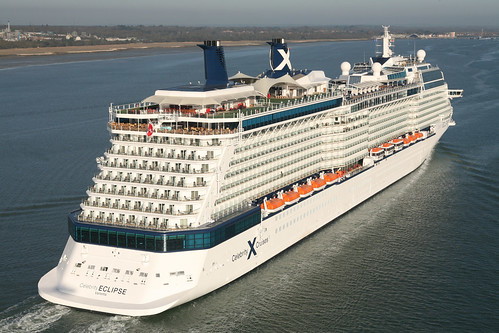 Its investigation revealed that many members of staff receive less than half the UK national minimum wage (£6.19 an hour), with some of the lowest paid workers earning just $600 per month, the equivalent of around £1.30 an hour, and no gratuities.

Members of staff also claimed they are required to work seven days a week for months on end without rest days, while others allege that they were forced to pay expensive fees to recruitment agencies to obtain their job.

Over the five weeks, the reporter’s earnings averaged £2.24 per hour, and he was asked to work 16 hours a day. His earnings were less than he had been promised by the British recruitment agency that found him the job, and he was forced to pay £570 out of his own pocket for uniform, a compulsory medical and a visa.

The programme – which airs at 8pm tonight – also features experts who accuse the cruise industry of flying a “flag of convenience” by registering their ships in countries where employment laws are less stringent.

Celebrity Cruises’ American parent company, Royal Caribbean International, is incorporated in Liberia, while the vessel Celebrity Eclipse is registered in Malta, meaning neither British or US employment laws apply.

While Celebrity Cruises said it would investigate the allegations that recruitment agencies had imposed fees on potential employees, it confirmed that the Channel 4 reporter had been paid the correct amount. It accused the programme of being “biased and unbalanced”, said it was “committed to our employees, both shipboard and shoreside”, adding that it operated “within the letter of the law”.

The Passenger Shipping Association, which represents dozens of cruise lines, including Celebrity Cruises, said that the welfare of staff was a “priority”.

“Cruise lines operate in full accordance with International Labour Organisation (ILO) recommendations for minimum wages for seafarers and all on board standards, such as rest periods, are agreed with industry bodies including seafarers’ trade unions,” it said in a statement.

“In addition to their salary, crew are provided with a number of benefits free of charge including room and board and cruise-line sponsored medical care. As an industry we support the introduction of the ILO’s Maritime Labour Convention to provide more comprehensive rights and protection for all crew members.”