Skift Take
Gulf carriers have led the march into the heart of Africa, and others have followed, as the last great race in the global aviation industry has begun.
— Rafat Ali
Share
Tweet
Share
Post
Send

After decades as the poor relation of global air transport, Africa is attracting carriers from Brussels to Beijing as a commodities boom spurs economic growth.

British Airways began serving its 19th destination there on Sept. 10, while Qatar Airways Ltd. adds its fourth route of the year next month and FastJet Plc starts flights in November with the aim of becoming the first ever pan-African discount carrier.

Airlines hurt by traffic declines elsewhere are rushing to tap a rare growth market as economies in the sub-Saharan region expand an average 5.3 percent in 2012, outpacing Russia, Brazil and much of Asia, according to International Monetary Fund estimates. Hurdles to expansion include safety issues, corruption, state interference and of selling tickets in economies reliant on cash and lacking ready internet access. 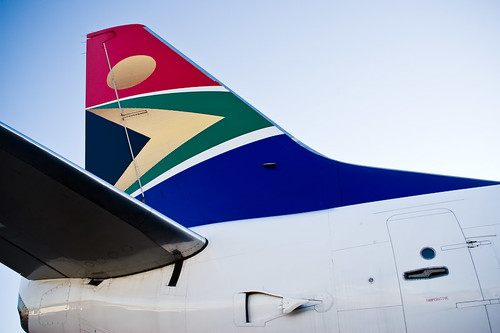 “With the right cost structure there’s no reason why airlines shouldn’t succeed,” International Air Transport Association Chief Executive Officer Tony Tyler said by phone from Dakar during a visit to Senegal this month. “We’ve seen that happen in Asia, Latin America and other parts of the developing world. People here say the easiest way to fly anywhere in Africa is via Paris, which is ridiculous.”

British Airways, a unit of International Consolidated Airlines Group SA, added flights to Liberia via Sierra Leone on Sept. 10 and now serves 16 Africa countries. Brussels Airlines – – 45 percent owned by Germany’s Deutsche Lufthansa AG — has almost doubled the number of passengers it carries to the continent since 2008 and founded a subsidiary in the Congo.

Turkish Airlines is “very interested” in the continent, CEO Temel Kotil said at a conference on Sept. 9. The carrier will serve 24 cities there as of Nov. 16, when it adds Nouakchott in Mauritania to the network, with about 80 percent of passengers switching flights in Istanbul — double the usual proportion — reflecting the relative lack of direct African services.

Gulf carriers are also adding African routes, with Dubai-based Emirates, the world’s biggest airline by international traffic, leading the way with 22 destinations, including the addition this year of Lusaka in Zambia and Harare in Zimbabwe.

Qatar Air will fly to Mozambique from October, its 18th African route, after already adding the sub-Saharan destinations of Mombassa in Kenya, Kilimanjaro in Tanzania and Kigali in Rwanda — the fastest growing of Africa’s top 25 airports. Abu Dhabi-based Etihad Airways this year began flights to Nairobi and Lagos, the continent’s two busiest hubs, and will serve Addis Ababa from November for a total of eight African cities.

African business-aircraft demand is likewise accelerating, with the fleet expanding 25 percent in the 2007-2011 period versus the prior five years to 1,156 planes, Hawker Beechcraft said this month, citing JetNet research. About 40 percent are in South Africa, with 9 percent in Kenya and 6 percent in oil- endowed Nigeria, which accounted for 11 percent of new sales.

Still, the industry is starting from a low base, adding $8 billion to Africa’s gross domestic product in 2011, the smallest contribution in any continent, and employing 260,000 people, IATA says. That compares with $231.9 billion and 3.1 million jobs in North America, which has the biggest aviation economy.

Air links have traditionally been strongest with former colonial nations in Europe, in southern and eastern Africa, and on a north-south axis down the continent’s spine. That means growth opportunities are greatest on ill-served east-west routes, both within the region and to the Americas and Asia, said Herman Carpentier, Africa sales chief at Brussels Airlines.

The company’s response has been to establish Korongo Airlines, an $11 million joint venture with mining entrepreneur George Forrest’s Groupe Forrest International in the Democratic Republic of Congo, a former Belgian colony where the economy is forecast to grow 3 percent this year.

The unit, which operates from Lubumbashi in the south of the country to the capital Kinshasa and to Johannesburg, plans to expand to commercial hub Mbuji-Mayi and mining center Kolwezi in the next year, according to Carpentier, who said the model could be replicated in other African countries if successful.

“There’s a general lack of intra-African flights, yet other infrastructure is very basic or non-existent in some areas, so air travel is the best way to get around,” Carpentier said in a phone interview from Brussels. “I think there’s real demand.”

Air Cemac, an airline planned by governments in central Africa, chose Air France-KLM Group as a strategic partner after terminating an agreement with South African Airways, a spokesman for Gabon’s presidency said last month. Air France is also an investor in Air Cote d’Ivoire, which plans to start next month.

It’s in the east that FastJet will commence flying with the aim of becoming the first discount carrier to span the region. The company is building a fleet of Airbus SAS A319 jets and will operate first from Tanzania then Kenya, Ghana and Angola using licenses held by majority investor Lonrho Plc, a mining, oil and agricultural group active in Africa for more than 100 years.

The challenges for such startups are very different from those faced elsewhere, according to Ron Peri, CEO of Orlando- based airline ticketing specialist Radixx International, who sums them up as the “Three Cs” — for a cash-based economy, the prevalence of corruption, and a general lack of competence.

“If you have strong cash markets but not necessarily the strongest personal ethics you wind up with corruption all over the place,” Peri said in an interview. “You need to have audit trails everywhere. In Africa they talk about ‘revenue leakage,’ which is shorthand for ‘my employees are robbing me blind.’”

Graft isn’t limited to those directly involved in revenue collection, according to IATA’s Tyler.

“Governments can’t stop interfering and squeezing to try and get money,” he said. “They should look at aviation not as a cash cow to be milked but as an engine for economic growth which in the long run will provide much more tax revenue, employment and social development. We’ve seen that happen in Asia.”

Eight directors at state-owned South African Airways, the continent’s biggest carrier, resigned after a disagreement with the government ahead of the release of financial results, Chairwoman Cheryl Carolus — who was one of those who quit — told Johannesburg’s SAFM radio station today. SAA may have had an full-year loss of 1.5 billion rand ($182 million), Business Day reported, without saying where it got the information.

In Transparency International’s 2011 Corruption Perceptions Index, where 0 is “highly corrupt” and 10 “very clean,” Rwanda fared best among African nations with a score of 5, with war- ravaged Somalia ranking equal to North Korea at the very bottom.

The prevalence of cash over credit means revenue collection models also differ from those in established markets, with sales dependent on travel agents and online bookings requiring leeway for money transfers to be made days later, according to Peri.

That poses headaches for carriers such as FastJet, which may struggle to replicate the online sales strategy that backer Stelios Haji-Ioannou used at Britain’s EasyJet Plc, Radixx says.

FastJet CEO Ed Winter said in an interview that if prices are competitive Africans will find a way to pay, whether via agents, internet cafes or mobile banking, which he says has “really taken off” because of the lack of access to computers.

“The other thing is that there’s a fairly low expectation that the plane will be there, so people prefer to hand over bundles of cash at the airport when they can see it,” he said. “Once we’ve won their confidence they’ll be prepared to book.”

The ultimate test of Africa’s maturing aviation industry may be the success of otherwise of the continent’s homegrown airlines in tapping the benefits of its economic expansion.

While overseas trade has increased, foreign operators are ahead in “cashing in” on that growth, said Titus Naikuni, CEO of Kenya Airways, which is almost 27 percent owned by Air France-KLM and a member of the European company’s SkyTeam global alliance. The carrier is sub-Saharan Africa’s third-largest, after South African Air and Ethiopian Airlines Enterprise.

Tewolde GebreMariam, CEO at Ethiopian, which has expanded its business through the ASKY Airlines venture in Togo, said in an e-mail that Africa is “dominated” by overseas entrants. The local share of international traffic has slipped to 18 percent from 22 percent in recent years, according to the carrier, a member of the Lufthansa-led Star Alliance since December.

“The players left are pretty big, with pretty substantial government backing,” the IATA chief said. “If they can manage themselves well and develop the right international partnerships then their prospects are good.