The variety of luxury hotels in Toronto portrays the diversity of its evolving neighborhoods with room décor as varied as chic boutique to black-and-white photos of the city’s top athletes.

The new Thompson Toronto, located near the once raffish and now hip King West neighborhood at the corner of Bathhurst and Wellington, features a 152-foot-long, black-and-white interpretative mural of the local skyline that dominates the decor of its elongated lobby bar. 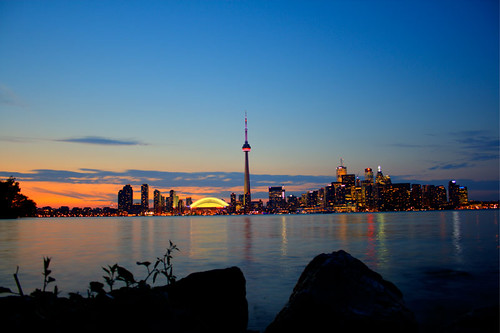 Four luxury properties have opened in Toronto since June 2010. Photo by Intiaz Rahim.

An arresting work of art (it was created by Barcelona-based artist Javier Marsical), the mural is also a stark representation of the proliferating high-rise construction, especially along the Lake Ontario littoral, that is altering the profile of this city.

The recent expansion of the city’s luxury hotel sector is just one aspect of that building boom. Four luxury properties have opened in Toronto since June 2010, and they will soon be joined by two more top-shelf hotels: a new Four Seasons (the old Four Seasons closed in March) and a Shangri-La. The former is scheduled to debut in October, and the latter by September.