Skift Take
AA is the first US airline to give all flight attendants a tablet, but it will need more than tablets to improve its recent reputation for flight cancellations and unfavorable labor decisions.
— Samantha Shankman
Share
Tweet
Share
Post
Send

American Airlines is handing out 17,000 Samsung Galaxy Notes to flight attendants, the airline announced on Wednesday.

The tablets will be used like a cheat sheet by attendants to help improve customers’ in-flight experience. Attendants will have access to passengers’ meal and drink preferences and be able to identify high-value or special-needs fliers. The tablet will give attendants a better idea of who they are working with, where they are sitting, and how to best interact with them. 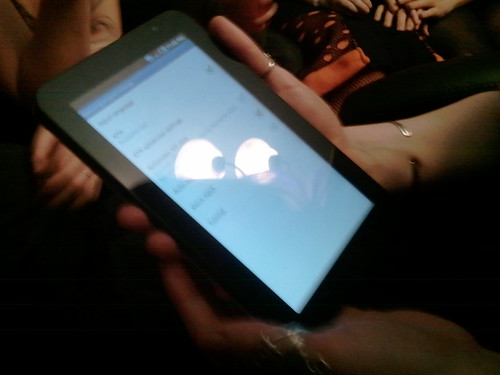 Flight attendants chose the Samsung Galaxy Note since it fit in one hand or their pockets. Photo by George Kelly.

American passengers should be pleased with the announcement as the technology will hopefully remind attendants of fliers’ needs like food allergies, or alert them if a child is traveling alone. The tablets will eventually provide real-time updates on passengers’ connecting gates or delays, but not until aircraft are outfitted with in-flight Wi-Fi.

A pilot program was launched this past spring during which 40 flight attendants tested various tablets. The airline says the 5.3-inch tablets were chosen by attendants because of their small size.

It’s interesting that the announcement comes along with news of 11,000 employees receiving layoff warnings, an unprecedented number of delays and cancelled flights, and labor cutbacks.

To give you some perspective of how much the airline is spending on the technology, look at it this way: If an American Airline flight attendant makes an average yearly salary of $44,840 and the tablets were bought at a wholesale price of $209 each (this is for the 10.1” tablet) for a total of $3,553,000, then the purchase replaced the salaries of approximately 79 flight attendants.

Here’s a video from American Airlines:

And here’s how the Galaxy Note works: