Flights haven't run between the countries since January, forcing passengers to travel via Kenya or Ethiopia to cross the border. The return of flights is welcomed by citizens, who hope direct flights will return to regions outside the capital as well.

Commercial flights between Khartoum and Juba resumed on Tuesday, after they were stopped in January a peak in tension between Sudan and South Sudan.

Sudan’s aviation authority suspended the daily direct flights between Juba and Khartoum after an initial deadline of 9 April as they were no longer domestic thus required an international agreement. South Sudan broke away from Sudan in 2011, leaving numerous issues outstanding, including border demarcation, security and oil.

This led in April this year to a brief conflict over a contested oil-rich border area bringing the two sides to the brink of all-out conflict.

The cessation of flights between the two capitals has also further cut off the exchange of goods and services as well as movement of the people. Before South Sudan’s independence in July last year Khartoum closed the border, citing security reasons, with major economic consequences for states either side of the new border. 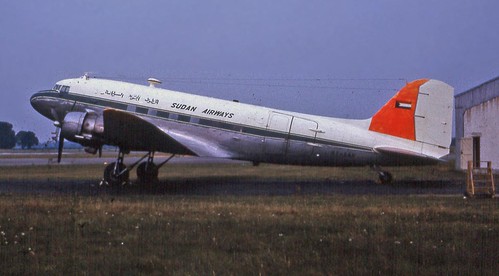 The two nations sign a four freedoms deal in August representing the freedom of residence, movement, economic activity, and freedom to acquire/dispose of property. Photo by Phillip Capper.

Sudan has allowed some exceptions for South Sudanese returning to new nation. An agreement on citizenship rights of nationals of the two Sudans living in either country was drawn up at the start of the year but was scrapped by Khartoum at the time of April border conflict.

Both sides accuse the other of backing rebel groups in each others’ territory, however, talks resumed in August and an agreement to resume South Sudanese oil-production and transportation through Sudanese infrastructure was reached. In the last few weeks the two sides also signed a bilateral agreement that permits Sudanese carriers to restart direct air travel to South Sudan.

The resumption ends months of air passengers having to travel between the two nations via Kenya or Ethiopia.

“Direct flights between Juba and Khartoum resumed today. This is the implementation of the agreement which the countries through ministries of foreign affairs signed in August. It is a positive beginning”, David Martin, Undersecretary with South Sudan’s Ministry of Transport said on Tuesday

Nearly a half million South Sudanese still live in Sudan. In March the two sides negotiated a “four freedoms” agreement which would allow citizens of both states to enjoy “freedom of residence, freedom of movement, freedom to undertake economic activity and freedom to acquire and dispose property”.

However, conflict over the Heglig/Panthou border area meant that Khartoum unilaterally cancelled a planned trip of Sudan President Omer Al-Bashir to meet his counterpart President Salva Kiir in Juba to sign the deal.

Talks eventually resumed in August and in September the Khartoum announced that the text of “four freedoms’ deal is ready for signing by two heads of state.

Kau Nak, a diplomat at the South Sudanese embassy in Khartoum described the resumption of air transport as “starting of people to people relations and building of social ties and bilateral cooperation”.

Pointedly referring to Sudanese and South Sudanese as one family divided only by administration, Nak emphasized the importance of trade and free movement of the citizens between the two states without fear of threats.

“South Sudan supports the strengthening of integration built on common understanding and with the mutual interests of close geographical partnership taken into account,” Nak said in an interview broadcast by South Sudan Television on Tuesday.

In Wau, business and government officials welcomed resumption of the air transport and expressed a desire to extend the resumption of flights to Wau and Malakal as well as Juba.

“This is very important indeed. We have people in the north and South who want to come and those who want to go but they cannot move because all ways were closed. With this resumption we believe a lot of things will move”, Abuk Deng Mawien, a South Sudanese woman at Wau market told Sudan Tribune on Tuesday.

Abuk said her mothers with two brothers are among South Sudanese still in Khartoum.

“They want to come. My husband has struggling to find ways to bring them since. We have managed to bring two sisters through Ethiopia but it is very expensive. We sold out three cows to bring only two of them”, she explained.

Akot Madut Hol, another resident of Hai Dinka in Wai town expressed a desire to extend resumption of flight to Wau so that citizens of Bahr El Ghazal who are still in Khartoum could be directly flown to Wau instead of Juba.

“I would appreciate if our government discuss possibilities of extending it Wau so that our people from greater Bahr El Ghazal who are still in Khartoum come directly to Wau. The same for Malakal and other places”, he said.

Hol said his wife and a child with two sisters have remained in Khartoum and has also been trying ways to bring them to South Sudan since last year.

Canada's draconian restrictions will likely ease in the coming weeks, but what they'll consist of and whether a clear reopening plan will come as fast as tourism officials want remain unclear.

Australia has had better fortunes in containing the pandemic than many other countries, partly by closing its international borders in March last year. Yet keeping borders sealed until mid-2022 could hurt many tourism brands.

Many border security agencies aren't ready to cope with a return to pre-pandemic levels of travel if they have to track additional pieces of information like traveler health. Blame the holdup on a debate about tactics and tech, not just budgetary shortfalls.