Skift Take
Captain Schettino lost both his career and integrity by making every wrong decision possible, and both Costa and parent company Carnival are likely to come under closer scrutiny for both their safety procedures and their crews’ credentials.
— Samantha Shankman
Share
Tweet
Share
Post
Send

Court-appointed experts have squarely blamed the captain of a cruise ship that ran aground off Italy for the wreckage and deaths of 32 people, but they also faulted the crew and ship owner for a series of blunders, delays and safety breaches that contributed to the disaster.

The Costa Concordia ran aground and capsized off the Tuscan island of Giglio on Jan. 13 after Capt. Francesco Schettino took it off course and brought it close to the island as part of a stunt. He is accused of manslaughter, causing the shipwreck and abandoning the ship before all passengers were evacuated.

Eight other people, among them crew members and Costa’s crisis coordinator, are also under investigation. The court in Grosseto ordered the expert investigation to help it determine who, if anyone, should be put on trial. A hearing is scheduled for next month. 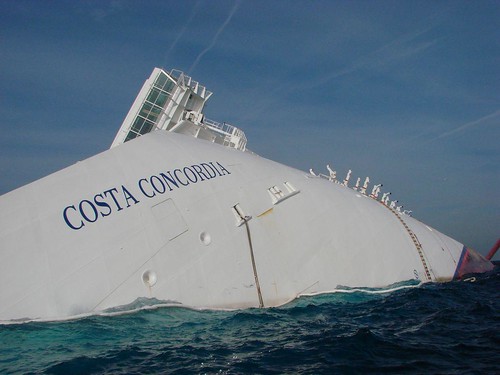 Captain Schettino watched from shore as his passengers were forced to jump ship. Photo by European Commission DG ECHO.

In a 270-page analysis, the four experts described in second-by-second detail the unfolding disaster as Schettino slowly came to realize the gravity of the situation. Using data and voice recorders to reconstruct the drama on the bridge, the report showed how Schettino failed to grasp for a good 45 minutes repeated reports from his crew that his ship was flooding and its motors dead.

The analysis came out Wednesday and was placed online Thursday by the Rome daily La Repubblica.

The experts contrasted what went wrong on board with maritime rules and procedures and determined that Schettino should have given the “abandon ship” order at 10 p.m. that night, 15 minutes after the 9:45 p.m. grounding against the rocks off Giglio.

Instead, the evacuation order only went out at 10:43 p.m. — and Schettino himself didn’t give it but another officer, in violation of maritime rules. By that time, passengers on their own had already reported to their muster stations with life jackets on, despite a decision from a crew member at one point that they should go back to the dining room.

“Madonna, what a mess I’ve made,” Schettino muttered soon after the collision, according to the transcript.

Beyond Schettino’s faults, the experts said a series of problems hobbled the execution of his initial maneuver and efforts to fix it, and contributed to the botched evacuation. Bridge crew members bungled directions and didn’t understand his orders because of language barriers. Other crew members weren’t trained or certified in security and emergency drills, the report found.

In all, the experts said, Schettino and his bridge crew showed “scarce professional seriousness” before and during the disaster, with Schettino joking just before the crash, after his helmsman again misunderstood an order, that he needed to do it right “otherwise we go on the rocks.”

In a statement, Costa said by law it was Schettino who was supposed to have alerted authorities about the accident, and that the captain assured the Costa crew on land that he had done so. And regardless, Costa said, Schettino’s reports to Costa’s headquarters were so delayed, “partial and confused” that the company couldn’t discern how serious the emergency was.

Yet the expert report said Schettino had “clearly explained the situation” to Costa’s fleet crisis coordinator in his initial call. Schettino was far less forthcoming when the Livorno port authorities called him after hearing word the ship was in trouble: in that conversation, Schettino only told the port that there was a blackout on board.

And Costa firmly rejected the experts’ claims that the crew was unprepared for emergencies, saying the “alleged defects in the certifications of some of the crew” didn’t affect the evacuation.

From the start, passengers described a confused and delayed evacuation, with many of the lifeboats unable to be lowered because the boat was listing too far to one side. Some of the 4,200 people aboard jumped into the Mediterranean and swam to Giglio, while others had to be plucked from the vessel by rescue helicopters hours after the collision.

Some passengers said they were shocked to see Schettino already ashore when they were being evacuated. Schettino claims he helped direct the evacuation from the island after leaving the ship. The report demonstrates how he refused several demands by port authorities to return to the ship to oversee the evacuation.

Schettino has insisted that by guiding the stricken ship to shallower waters near Giglio’s port instead of immediately ordering an evacuation he potentially saved lives. He has claimed that another official, and not he, was at the helm when the ship struck.

But the timeline in the expert report makes clear that he had assumed control with a verbal order at 9:39 p.m., after being called back up to the bridge to oversee the stunt, which he had planned as a favor to friends from Giglio.

Work has begun to remove the tons of rocky reef embedded into the Concordia’s hull, a first step in plans to eventually tow the wreck away from the island.

The whole removal process is expected to take as long as a year.