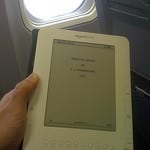 The agency plans to scrutinize the impact of every device on aircraft, but both airlines and device companies are eager for approval and running their own tests to hopefully speed up the process.

… Late last month, the F.A.A. announced that it was putting together an industry working group to study portable electronics usage on planes during takeoff and landing. (Don’t worry about chattering passengers: this is for e-readers and tablets, not for cellphones.)

But how long can these tests take? … The F.A.A. has indicated the process will take at least a year. “The government-industry group, established through an aviation rulemaking committee, will be formally established this fall and will meet for six months,” it said in a statement.