Dubai is the real winner in Qantas Airways’ deal with Emirates

Skift Take
In addition to cutting British Airways out of a route into Australia, the move Dubai also cuts Singapore out of long-haul routes between Europe and Australia.
— Jason Clampet
Share
Tweet
Share
Post
Send

The move by Australian carrier Qantas Airways to end its alliance with British Airways and team up with Emirates is a vote of confidence in Dubai’s fast growing status as a global aviation hub, and also signals the inevitable shift in the balance of power from Europe’s legacy carriers to the Gulf, analysts and aviation experts said on Thursday.

For the struggling Australian carrier, the 10-year alliance with Dubai’s Emirates will be a key step in its efforts to strengthen its loss-making international business. 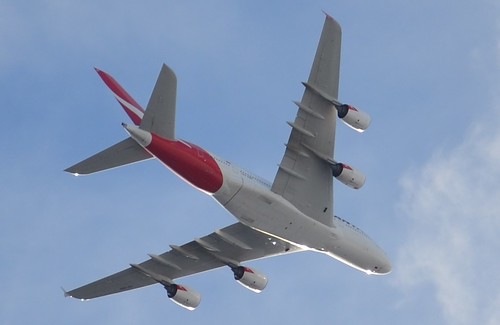 A Qantas plane over Sydney, Australia. Photo by Simon Clancy.

Qantas will also be replacing Singapore with Dubai as its hub for European flights from March 2013 and co-ordinate pricing, sales and schedules with Emirates under the partnership. As part of the landmark deal, the Australian carrier will move its long-haul hub from Singapore to Dubai, where Emirates’ Terminal 3 building is already filling up to the rafters.

The new alliance is deeper than a straightforward codeshare arrangement but stops short of a global revenue-sharing deal or equity injection from either side. For customers, benefits include the pair sharing airport lounges and frequent flyer programmes, analysts said.

The move is in line with Dubai’s dynamic plan to ramp up capacity through Dubai airport to match the airline’s aggressive expansion plan and boost the number of passengers travelling through the emirate where aviation and related businesses already account for a fifth of its employment and almost a third of the cross domestic product.

Paul Skelton, head of HSBC Global Banking Mena, said the move “is a further proof of the importance of Dubai as a leading international trade and travel hub.”

“Aside from allowing Qantas to use the custom built Terminal 3 building in Dubai, that Qantas is now routing its key Sydney and Melbourne connections through the city proves that Emirates competitive edge has forced the ailing Australian airline into joining a partnership that is being driven entirely by Emirates management team,” he said.

He said the move by Qantas demonstrates just how effective Emirates has been in the last decade or so at providing services to Australia as well as getting Qantas to open up its first GCC connection. “The lack of a GCC destination was always a chink in Qantas’ battle plan and frankly, anyone who doesn’t operate to the GCC is not just missing out — they leave themselves vulnerable to the huge competitive edge that Emirates has. Qantas has learnt this lesson the very hard way.” Ahmad said the integration of their frequent flier programmes, the use combined usage of A380s as well as sharing Terminal 3 in Dubai will allow for much greater connectivity options for customers — especially when you look at how broad Emirates’ global network is compared to Qantas. “Qantas customers will be spoilt for choice and will likely leave Qantas in droves, much to Emirates’ delight.”

By breaking off its deal with British Airways, the UK flag carrier is now on the rack, said Ahmad.

“It has lost a long-time partner in Qantas on the fabled Kangaroo-route and now faces the spectre of even more competition in Dubai given that Qantas will fly there too from its key Sydney and Melbourne hubs. Of course, if BA were smart, they too would join Qantas and Emirates but whether they do so is unclear as it would leave the one world alliance in disarray — it is unlikely BA or Qantas could ever convince Emirates to join since the Arab carrier has often stated that it is not interested in joining any of the global alliances. And frankly, it doesn’t need to.”

“Either way, this strategy says more about how Emirates has forced Qantas into submission than it does about Qantas surviving in the future. With questions abound about Qantas’ weak global strategy, this move will not allay fears for investors who will rightly question why Qantas didn’t move sooner to partner up with Emirates when it was clear years ago that they could never compete directly.”