Skift Take
Patrick McLoughlin won’t have time to even think about flying out of the UK with Heathrow’s expansions plans still in the air and Richard Branson down his throat over the west coast rail line.
— Samantha Shankman
Share
Tweet
Share
Post
Send

Just as the aviation industry was popping corks at the departure of a transport secretary who opposed Heathrow expansion, it has emerged that the new incumbent has his own issues: a fear of flying.

Patrick McLoughlin, the new transport secretary, has previously admitted that he not only has a fear of flying but he represents the most landlocked constituency in the UK. 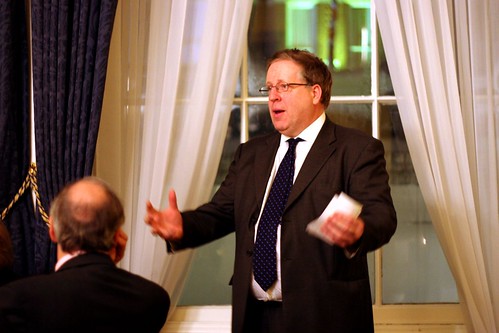 Patrick McLoughlin replaces Justine Greening after less than a year of her appointment. Photo by Altogetherfool.

McLoughlin made the admission in a magazine interview recalling the time when he was invited to be a junior minister for aviation and shipping in the Thatcher government, 20 years ago.

In an interview with Total Politics magazine, McLoughlin related how the then transport secretary, Cecil Parkinson, invited him to take up the brief. “I replied: ‘Cecil, I’ve got two problems with this. I’ve got the most landlocked constituency in the United Kingdom, and I’m afraid of flying.'”

McLoughlin said that Parkinson replied it meant he would “bring an open mind to the subject”. He served in the department for three years.

The biggest transport question for the the new minister is about airport expansion, and especially Heathrow. McLoughlin will inherit a row over what to do next: government policy rules out a third runway in this parliament but the Treasury has indicated it is open to the idea in the long term. The issue splits the government and backbenches alike.

There is another unresolved battle, over rail. A high court judge is weighing the merits of Virgin’s application for a judicial review of the west coast main line franchise award. If Virgin’s legal action is dismissed, McLoughlin will have to deal with an angry Richard Branson. If not, the consequences could be more far reaching – possibly a review of the franchising process, delaying a host of contracts up for renewal in the next two years. He may also push the Treasury to again soften the blow for commuters of planned rail fares, set to rise between 6% and 11% in January.

He will have to choose this autumn between the route options for the £33bn high-speed rail network north of Birmingham – a decision with the potential to create new areas of local opposition, particularly in London and the south.

Road-building headaches lie further ahead. And for those Jeremy Clarksonites who believe there has been, in last-but-one incumbent Philip Hammond’s words, a “war on the motorist”, there is the promised raising of the motorway speed limit. But with road deaths climbing, McLoughlin may choose to let this one slip quietly away.