Budget airline easyJet will assign seats on all future flights Skift Take
EasyJet is attempting to disguise new fees for choosing seats by focusing on the benefits of seat allocation and mentioning it as an improvement for business travelers.
— Samantha Shankman
Share
Tweet
Share
Post
Send

EasyJet is ending the desperate rush for prime seats on low-cost flights by launching allocated seating across its network.

Having been eschewed by budget carriers in the past for impeding fast turnaround times, the Luton-based airline said seat allocation did not appear to slow down journeys and is more lucrative than speedy boarding schemes. It expects 1a and 6a to be the prime picks on flights following trials on 6,000 flights this summer.

Allocated seating will be rolled out across easyJet’s network from November, with all passengers allocated a seat. Those wishing to change their seat will be charged £12 for front row and over-wing seats, £8 for berths in the four rows behind the front row, and £3 for anywhere else on the plane. “The majority of people will not have to pay for their seat,” said an easyJet spokesman. 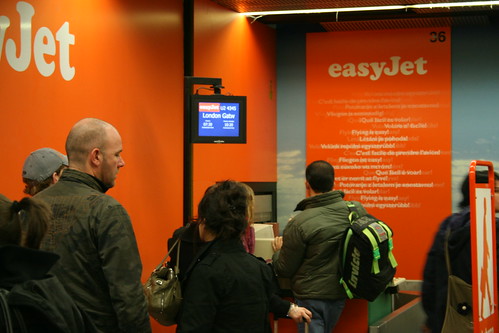 EasyJet has mulled allocated seating trials in the past but Carolyn McCall, easyJet chief executive, has decided to push ahead after a trial scheme showed encouraging results. The trials found that on short-haul flights such as London to Glasgow, the £3 window seat 6a was the most popular, while on longer routes such as London to Sharm el-Sheikh the £12 1a berth is the most sought-after due to the more substantial legroom. Predictably, seats in the middle and near the back found the fewest takers, with 16b the least desired on short haul and passengers avoiding 19b on long haul.

“This is an example of easyJet trying to do all it can to make travel easy and affordable for our passengers,” said McCall. “Our customers asked us to trial allocated seating and we are really pleased with the positive passenger feedback during the trial. As importantly, we have shown that we can do so while delivering strong on-time performance – the most important driver of passenger satisfaction.” EasyJet said that more than seven out of 10 passengers on trial routes preferred the system to speedy boarding, where passengers pay around £10.50 to board a flight first – a service also offered by Ryanair.

Low-cost airlines have been characterised by their strategy of charging for as many services as possible, from inflight food to checking bags into the hold. However, some notions such as allocated seating have been ruled out by the likes of Ryanair because of their potential to clutter up planes, which would prevent low-cost carriers from executing the 25-minute turnaround times – the gap between a plane arriving at its gate and pushing off again – that allow them to run the busiest possible timetable.

Andrew Lobbenberg, an analyst at HSBC, said the move would benefit easyJet because it gives the airline the opportunity to make money from all seats on a flight rather than the 30 berths set aside for speedy boarding. “We would expect sales of pre-allocated seat selection and premium seat allocation in the front of cabin and exit rows to certainly exceed speedy boarding revenues. Speedy boarding was limited to 30 passengers per flight, but we imagine a higher share of passengers will opt to secure their seats in advance of travel.” He added: “Moreover, we think the switch to allocated seating will make travelling on easyJet notably less stressful. It will be far better for families travelling together. It will also remove the hassle of boarding which we think has been a material deterrent for business travellers. It should also be helpful for relations with airports: as customers spend less time standing in queues for hours before the flight, they should be free to spend more time and money in airport stores.”

However, Gerald Khoo, an analyst at Espirito Santo bank, said easyJet is replacing one of its most dependable sources of ancilliary revenue. “These charges replace speedy boarding, so this is not wholly incremental. But the hope is to make at least slightly more money than they were making before.”